You are here: Home / Experts / How Game Design Communication Can Make or Break Your Video Game Creation 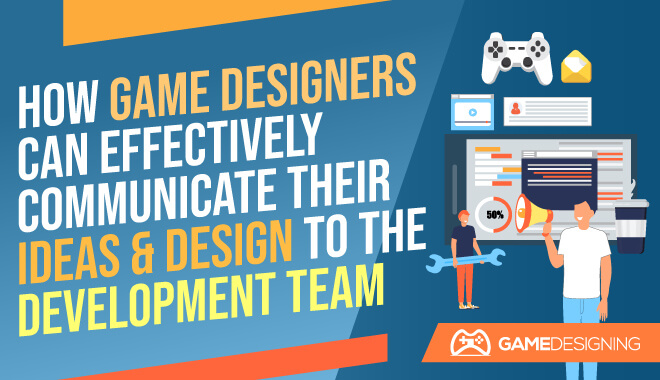 Creating a video game requires a lot of work from both the game designers and developers. But they are two different worlds. Designers work on the creative aspects of the game that players will see; the story, world, art direction, etc. But it is the job of the development team to build the world that they envisioned. It is the difference between an architect drawing up schematics for a building, and the construction crew who have to build it.

While both require a tremendous amount of work and skill; designers and developers look at the game through entirely different lenses. So how can a designer convey their ideas to the development team?

First, try to avoid a game of telephone. While talking over your ideas and writing them down in a game design document (GDD) are a great way to give the developers a basic understanding of what you would like, these methods of communication have their problems.

For example, a week after talking to a developer about your ideas, what they remember from that conversation may be different. Perhaps only slightly, but slight differences can add up quickly into a complete divide between your visions of the game.

As for the GDD, it is certainly an important reference tool you’ll come to rely on. But a large print document can be a challenge to sift through. At best, you can assume the developers will skim over the details in the GDD, or only use the pages that best apply to their needs at the time. This means that the bulk of the work can be misunderstood, or at worst even ignored.

This is not to say you shouldn’t have a GDD, but that you should think of it as an instruction manual. They are far easier to read if they are organized, with clear instructions separated by their steps. Also, include plenty of pictures if you can to add a visual element to the document. This will capture attention for longer and may be a good reference image for the developer.

Storyboards Are A Secret Weapon

Video games are a visual medium. So the way that you explain your ideas for a game should also be visual in nature. Storyboarding is a great way to portray these ideas. They can be a great tool for showing off exactly how you would like to see certain scenes of a game, play out. It can even be a reference guide to different shots and camera movements, in much the same way as on film production.

One of the biggest advantages of using storyboards to share your ideas with the development team is that they do not need to be incredibly detailed. A lot of visual information can be conveyed simply.

Netherrealm Studios, who have developed the most recent games in the Mortal Kombat fighting game franchise, is known to have used simple stick figure drawings in their storyboards of fatality animations, the finishing moves characters can perform after winning a match.

In other words, you don’t necessarily need the best artists at your disposal to spend entire days working on nothing but storyboards. In this case, you can do a lot with a little.

Since design and development are different fields of expertise, to avoid miscommunication it’s best to try and understand the needs of the developers as well as their point of view. While, as previously mentioned, simply speaking instructions can get misinterpreted down the line, it’s easier to avoid this if you speak to the developers often.

The direction of the design team might change at some point, make sure the development team is aware of this. Keep your programmers updated on what the design team has been working on. Set clear expectations for them and allow them to ask questions. This way, you’ll also have a sense of their expectations of you.

After all, while the creative team is likely to have grand ideas for your game, the development team may have a better idea of what can be realistically done. The closer both teams are, the more likely the developers are to understand your ideas when you explain them.

While Storyboards and pictures, as mentioned before, are a great way to communicate your ideas, there may be times where even they are not enough to convey a gameplay mechanic or concept. The problem is that it can be hard to show movement and gameplay ideas properly with static images.

This is where animatics and prototypes can help. By creating an animatic using simple animation software, you can visually show your ideas in a way that moves. But even then, it’s one thing to see a game, and another to play it. Animatics are nice, but you don’t control them, meaning there can still be a little dissonance between mediums that can cause confusion.

To solve this problem, building a simple prototype of the game mechanic can help. These should not be too advanced, as the process of building a prototype can be time-consuming and even costly. But for the most complex ideas, a prototype is by far the best way to showcase them to your development team.

In conclusion, effective communication is the key to the success of any group project, but even more so when it comes to making a video game. You have to make sure that your concepts make it from the design team to the development team unchanged, or else risk the game becoming a shell of what it could be.

By expressing your ideas and design through pictures, prototypes, animatics, or an open line of communication, you can ensure both teams are always on the same page. You’ll avoid troublesome arguments, and have a tight-knit group of artists and programmers ready to make your vision a reality.

At the end of the day, that’s what everyone is there for, so make sure that the vision both teams are working on really is yours.