You are here: Home / Experts / How Ralph Baer Changed the World of Gaming Forever 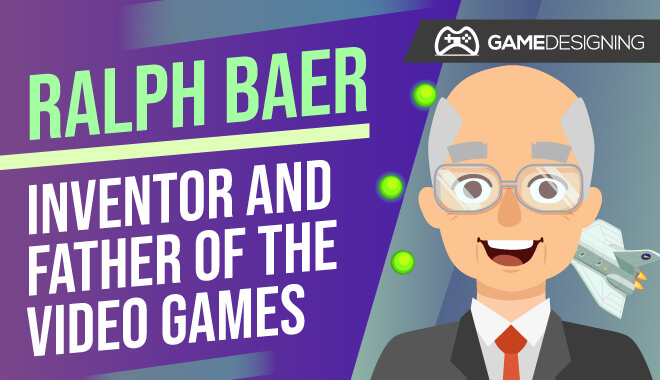 If the newest generation’s release is any indication of how popular gaming in your own home has become, it’s safe to say that gaming is permanently here to stay. Whether you prefer PlayStation 5, the new Xbox, or even playing your Nintendo Switch on your living room TV, home consoles are a huge deal.

It turns out that we console gamers owe a lot to a man named Ralph Baer, who had a massive influence on gaming, as well as the field of electronics.

But who exactly is Ralph Baer?

Born on the German border near France in Pirmasens, Ralph Baer and his family moved to the United States on the eve of the Second World War. When he was old enough, Baer dedicated himself to the field of electronics.

After serving as a radio tech in World War II, he went to school and earned his bachelor’s degree in TV engineering. Safe to say that Baer was ready to make some waves in the tech scene. He began working at BAE Systems in New Hampshire. What followed next was history.

Let’s look at some of his most famous game inventions, followed by his impact on the industry.

Here are some games and inventions that Baer is responsible for during his illustrious career.

Shooting Gallery was the very first light gun game and peripheral used in video game consoles. Remember Duck Hunt? You can thank Ralph Baer for inventing Shooting Gallery to make way for arcade staples like House of the Dead and Area 51.

Anyone who has played this adjective and challenging handheld game knows exactly how it goes. With four colors, players must press the corresponding buttons after they light up in a particular order. Baer and his colleague, Howard J. Morrison, developed Simon in the late 1970s.

Many of Baer’s inventions and contributions to electronics can be somewhat overshadowed by his undeniable magnum opus: the Magnavox Odyssey. Here it is, the very first home game console.

Thanks to the work he put in at BAE Systems and the help of two of his coworkers, Baer was able to make the Brown Box prototype into the home console. The Magnavox Odyssey’s production ran from 1972 to 1975. Not exactly a long run, but it left an indelible mark on the way games were marketed, made, and funded.

Magnavox was pretty rigid in its marketing and development of the console and its repertoire of games. In fact, no new games came out for the console from 1973 to 1975. This eventually led to the Odyssey’s demise.

Impact on the Video Game Industry

To say that Baer had an impact on the industry is a gross understatement. The man is directly responsible for the invention of the first home video game console. Beginning with the “Brown Box,” Baer and his two coworkers from BAE Systems were able to successfully market it as the Magnavox Odyssey. Surprisingly, the Magnavox Odyssey was a pretty substantial hit, selling well over a quarter of a million units.

Up until Baer’s inventions, the idea of playing video games on a home television set was kind of a long shot. Video games were perfect for university computer labs and different tech conventions. But home TVs?

Ralph Baer believed not only was it possible, but it would be a smash hit. He determined that the TV market was ripe for something wholly new and different.

Easily his most famous invention and prototype was the Brown Box. Sporting a wooden look, the Brown Box was the seventh and final form of Ralph Baer, Bill Harrison, and Bill Rusch’s console. Shopped around to different companies, Magnavox eventually picked up the console for distribution.

This eventually became the Magnavox Odyssey. While not exactly a commercial success, the Odyssey showed the world what was possible when you got a few smart, intuitive people together.

Understandably, Baer had some admirers. Who wouldn’t look at his long list of inventions and contributions?

One of his admirers, video gaming icon Nolan Bushnell, saw something to gain. Baer’s game, Table Tennis, caught Bushnell’s eye. He went ahead and created Pong from Baer’s idea, which turned some heads. Pong, obviously, did amazingly well. Everyone was after Pong’s magic: arcade companies, Activision, Mattel, and even Sears.

Magnavox took them all to court and claimed that this slew of companies was flagrantly ripping off Baer and the Maganavox’s game, Table Tennis. The lawsuits continued until the 1990s, with companies accepting and offering settlements regarding how video games are marketed, made, and advertised.

These were landmark cases, as the video game market was kind of like the Wild West. Great ideas were rewarded with little to no oversight. These court cases also made sure to communicate to everyone in the industry that, like other copyrighted materials and works, video games and consoles are in the same league.

How Did Ralph Baer Change the World?

Court cases and legal battles aside, Ralph Baer changed the world of gaming forever. He took video gaming outside of the computer labs and convention halls and put them directly into living rooms worldwide. Your favorite console, whatever it may be, would likely not exist without the pioneering spirit and technical know-how of Baer.

Baer passed away in 2014, leaving a rich, detailed, and iconic game development legacy in his wake. After earning the National Medal of Technology and having his American hometown of Nashua, New Hampshire, erect a statue in his honor, no one will forget Baer or his legacy anytime soon.

Now go ahead and boot up your console of choice and play for Ralph. It’s the least you could do.