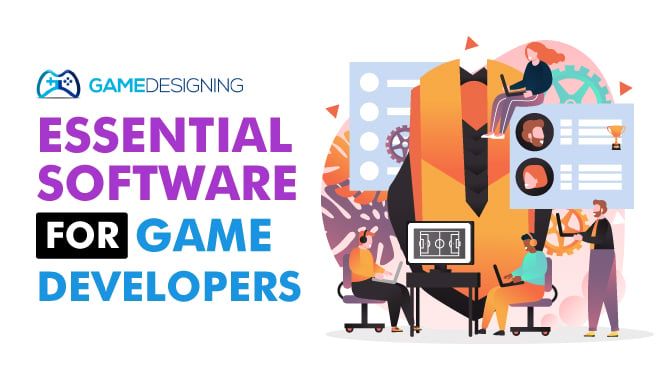 What software is used to develop games? There are so many tools and pieces of software for robust game design right at your fingertips!

We’re living in truly amazing times; the internet is host to all kinds of excellent software to help game designers of all calibers make their very own games.

Well, which platform is best for game development? The PC, no question. While game development can be utilized on any platform, namely mobile devices and consoles, the PC is the most widely used and documented. It also comes with some of the best software and engines available to would-be developers.

What is the best free game development software? Unity. Unity is a fantastic free engine that nearly everyone can use. Although it’s always recommended to have some coding knowledge, you don’t need to be a Unity master to reap the benefits of the game engine.

Then some serious tools will require some moderate (and more) experience with coding.

Which software is best for game making? It all depends on your style of game development.

If you’re a bigger studio, then maybe something like the Unreal Engine would be right up your alley.

The point is, there are plenty of options available to you, regardless of the kinds of games you want to make, and your current skill and experience levels. Let’s take a look at some good options! 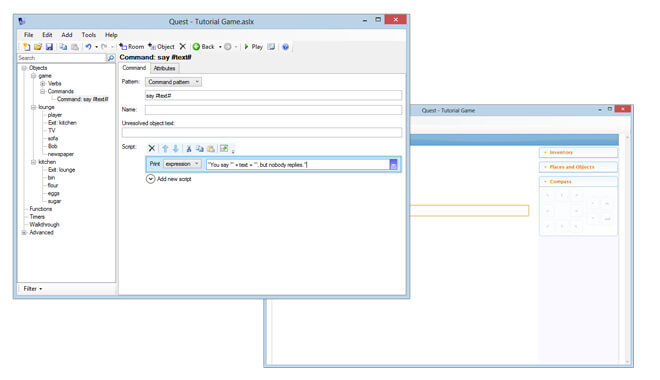 Let’s start at the very beginning with a super-basic game design program. It is easy to have super high expectations when you’re first starting out.

We’re talking about “I’m going to create the next Skyrim” ambitions. Dream big, always dream big, but know that you won’t be able to achieve a game like that overnight, especially if it’s your first night designing a game (someday, pal! Keep at it!).

Instead, you could start with a design tool that will let you focus on crafting a power-house narrative. Good storytelling is something that’s always appreciated. Hone your in-game storytelling skills by using Quest. Quest is a totally free program that runs in your browser.

This program will let you make a text-based adventure game. It won’t be much to look at (since it’s text-based) but it will let you focus on the story and choice-elements of a game. This linear approach to making a game will help you avoid any feelings of overwhelm.

Twine is another great tool for generating text-based games. It is also another completely free program. It publishes to HTML, which means you can post it wherever you want. It’s another great starting point for delving into interactive storytelling.

You can generate a stellar, nonlinear story without worrying about making the game’s aesthetic. It’s a great place to start if you’re looking to make RPGs moving forward (baby steps, hey?). There was a time before all the fancy graphics and gameplay mechanics, after all, so there’s no shame in starting in text! 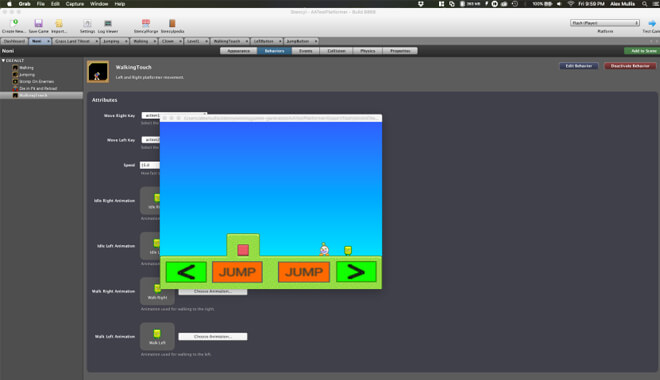 Here’s a great program for making a game that isn’t text-based, and still without using any code! For beginners with no coding experience, Stencyl has a drag and drop interface that is, for the most part, pretty easy to use.

If you’re a designer with some coding experience, Stencyl allows you to augment the program’s existing creation capabilities through code of your own.

You are able to design worlds by molding tile and terrain to your liking. You can also upload your own graphics to create different actors and game elements, and then tweak them until they’re perfect. You can design games for Mac, Windows, and Linux, but it’s definitely geared towards mobile games. 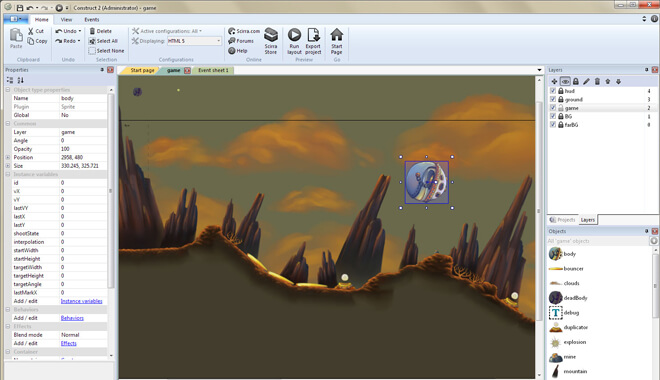 Construct 2 is another powerful 2D game creation tool, that lets you publish to HTML5. It is another program that is beginning-designer-friendly, requiring no coding experience to make the magic happen. Like Stencyl, it has tiered payment options. There is a free version where you can publish to the web.

To make mobile games, you’ll need to pay. Instead of yearly fees, there is a one-time fee that you pay upfront, which gives you access to Construct 2 and all future software updates.

Construct 2 has a showcase page that features games developed using the program, as well as a tutorials page and a forum to help you with any problems you may have. Those are good resources to see how other developers are using the software and to get you off the ground with your programming. We suspect you can guess what this program is best for… It’s right in the title, after all…

That’s right! RPGs! There are a number of different versions of the RPG Maker. All of them are available for a free trial download.

The latest, RPG Maker VX Ace, goes for $69.99 and gives you “the most powerful RPG making tools ever” (according to their website, of course). It’s yet another tool that doesn’t require you to have coding knowledge.

It’s pretty easy to pick up and use, but there is a very helpful community of users behind this program if you ever get stuck. With music and stock character images provided, you can make a pretty cool game without ever leaving RPG Maker. 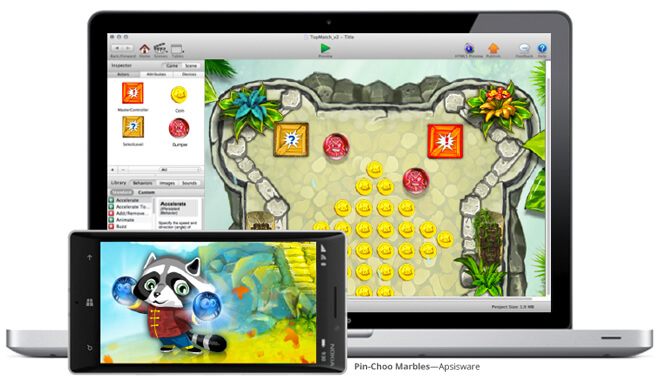 Here is another tool with a free option. Like other programs, Gamesalad uses a drag and drop interface, letting you build a game quickly, without putting effort into coding it yourself. When you finish a game, which the website says could happen in as little as an hour, you can publish it to “almost every platform known to man.”

A “Featured Games” section lets you check out sixty of the coolest games other developers have created using the program. There’s also an option to submit your own creations to the Gamesalad team, giving you an opportunity to have your game featured on the program’s site. 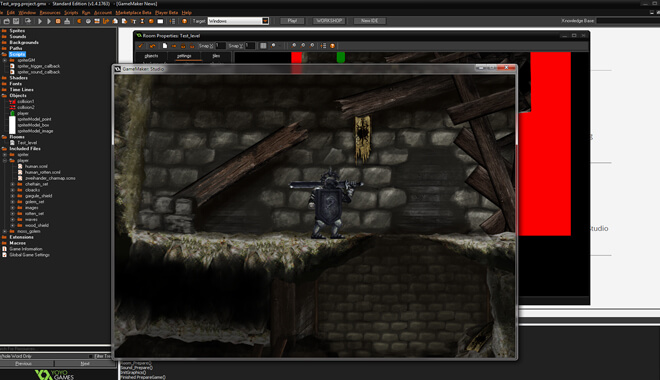 Game Maker, like Gamesalad and others listed before it, uses the drag and drop, code-free approach to game design. There is, as you probably guessed, a free version. There is also a studio version that starts at $150 dollars and increases in price as you choose more export options.

And, of course, there’s a Studio Master Collection, which goes for $800 dollars.

The interface is one of the easiest to use and ends up being one of the most powerful, too. Combine the in-program ease-of-use with the experience backing the program’s forum community, and this tool becomes quite a good place to start your code-free (for now) game design career. 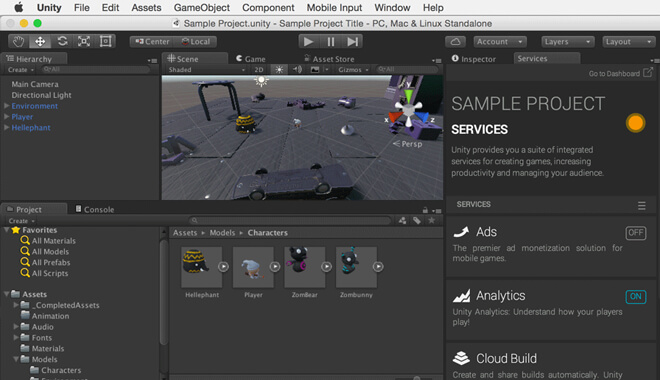 Finally, we stray from our code-free path. In order to use Unity, you’ll need to know how to code. If you have some experience with coding, then Unity will be an exceptional tool for you. You’ll be able to design both 2D and 3D games. For free, too, as the personal edition is downloadable at no cost.

A professional edition is available as well, which is subscription-based with prices starting at $75 dollars per month. If you are interested in more than just creating a game for personal reasons, Unity has some really cool engagement tools.

The powerful design elements of this software, in conjunction with its end-user data collection and game monetization help, makes it a great tool for building a game that you could profit from.

Even if you don’t care about the monetization aspects and aren’t as concerned with engagement, this is still an awesome program for practicing your game building and honing your coding skills.

Unity does so much more, but one of the other cool things it offers is a collaboration feature. When you want to create a game easily with some of your friends or colleagues, Unity has systems in place to make it very easy for you. 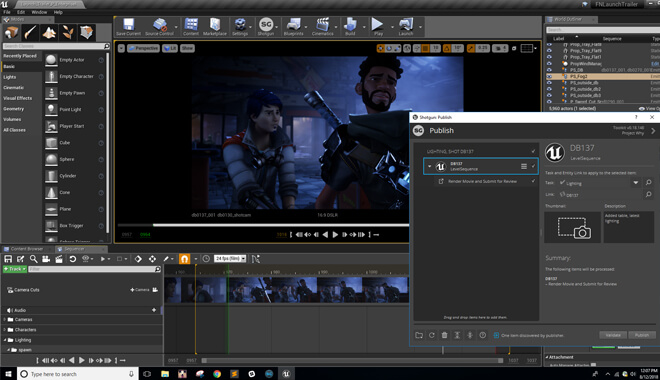 In March of 2015, Unreal Engine became free to download. The stipulation is that, if you monetize your creation, Epic Games gets 5% of your profits after your first $3000. You can use the Unreal Engine to make everything from 2D mobile games to stunning 3D open-world games.

You could be a student, an indie developer, or a professional game designer. This engine is being used by all levels of game designers, and your only limits are your time and creativity. The engine is powerful enough to keep up with your wildest game creation dreams.