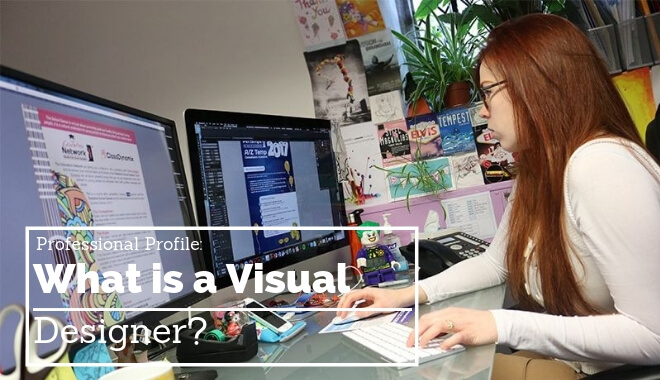 Today’s world runs on graphical and visual aesthetics. The more user-friendly user interface, better layouts, more works that are pleasing to the eye. All of these things and more make up the very essence of a visual designer. Visual designers have become the artistic ‘gatekeepers’; making sure things are looking clean and running smoothly.

Their presence in the world has magnified, and their duties and projects have spanned countless mediums. Photography, design, typography have all led the way for visual designers to become a force to be reckoned with in the artistic community.

Best described as a mixture of user interface design and graphic designer, the visual designer is the glue that keeps a project on track.

What the Job of Visual Designer Entails

The role of a visual designer is a multifaceted position in a company or team member that works in tandem with different designers—i.e. web designers, user interface developers—to make a product. Unfortunately, there’s no specific, definite answer to what visual designers do—they have their irons in many fires at a company.

Logos, icons, screen mockups, all of these are just but a few of the responsibilities of a visual designer. Communication is key and one of the main tenets of visual design.

You will rarely be working alone as a visual designer—instead, you’ll most likely be part of a diverse team of fellow creators with one vision, and you’ll need to make sure every part is in working order to make your project an appealing reality.

In brief, a visual designer works somewhat better as a blanket term for those who develop art and design for the digital world. You need to be someone with a creative eye for details; one that has almost a sixth sense when it comes to making an aesthetically pleasing design. Visual designers need to make everything come together for a project.

The customer or consumer has to be drawn in by unique, yet approachable designs and interface. Do you count yourself among them?

Primarily, you need visual design skills. These are the top 3 skills I believe you’ll need as a visual designer:

Creativity: this one’s pretty self-explanatory, but it’s what I think is the bread and butter of the profession. You aren’t going to get anywhere by not having a creative vision.

The creative vision you have should be the same one that gives you the ambition to go to a good design school and apply for great tech jobs in the right places. If you don’t have creativity, this isn’t the field for you at all.

Resourcefulness: You need to be able to think on your feet, as well as think outside of the box. You really need to think like an artist: not bound by normal design rules. If a design isn’t hitting the mark, you need to rethink it or envision a new solution for it.

Communication is key and can get you out of many frustrating binds with coworkers, employers, and clients.

Communication: I know it keeps coming up, but I can’t stress it enough. If you aren’t on the same page with your fellow designers or your clients, your product will ultimately suffer from your hesitation in the end.

Since many projects involve multiple people, keeping clear channels open for help, constructive criticism, and tips is essential for not only a positive working space but for your best potential.

A College Degree for Visual Design — a Must?

First of all, the best way to make your way as a visual designer is to have a strong background and passion for design and art. By now, you should have worked extensively through high school to get a good grip on design basics, do’s and don’ts, and your eye for artistic flair.

Usually, a bachelor’s degree is a typical requirement for a career in visual design. There are many schools to choose from, namely the Rhode Island School of Design (RISD). The professors here and the amount of funding for projects at this institution are second to none.

It will, however, take great visual design skills to reach this school and complete its quality programs and undergraduate degrees: with an acceptance rate of 29%, you’ll really need to prove you’re a cut above the rest. I list this school specifically because it is the best of the best consistently amongst design school rankings.

Some other schools that are also considered as one of the best art colleges in the US:

A friend of mine is one of the lead developers for mobile app design in a small town in the greater Philadelphia area. For this purpose, I’ll refer to her as Jen. She attended Drexel University, in a program she called ‘super easy’ for her.

Drexel University in Philadelphia, PA caters to the creative and ambitious go-getters of society, a great start for those interested in graphic arts. She started off interning at a similar company, giving her many of the skills her current employer was looking for.

Other schools can do this as well, making her very fortunate hire right out of college a reality for many. Now, it may not be exactly a breeze like it was for my friend, but it can absolutely be done.

At her particular workplace, the requirements are a bachelor’s degree; although she hinted that it was a very lax requirement. The consensus is the safe bet of having your bachelor’s in a related field to visual design.

I’m sure there are exceptions to some companies not having a strict requirement, but the right avenue for a great career, any other school above can deliver not only the education but the skills to find a great job in countless forms.

Another staple of visual design is the visual design software you use. The premier software is Adobe Creative Suite and other various design programs like my favorite, Photoshop. Other businesses require different programs, so not all are uniform in their requirements.

General knowledge of all visual design software is your best bet. Jen, for example, says her main tools are Adobe XD when helping to design web apps and Adobe Illustrator.

Now to some of the important stuff. Can you live comfortably off of your visual design career? It seems you can in most cases. Of course, you’ll have to work your way up like at any other place of business, but the benefits are amazing.

Some visual designer salaries are breathtaking in their scope. If you’re interested in where you’re located and what you can find, check this out. In Pennsylvania, where my good friend Jen works, the salary range for a full-time visual designer is $72,162 – $120,750. New York is a whopping $88,164 – $147,525.

Even Anchorage, Alaska is $61,620 – $103,110—nothing to turn your nose up at! You’ll want to probably be based in an urban hub, somewhere like New York, Chicago, or Los Angeles for optimal results. However, with a higher salary comes harder work and higher levels of competition.

But if you’re forced to be in Anchorage Alaska, you can still make a pretty penny on visual design way up north.

However, as you could probably anticipate, places like Sioux City, Nebraska, although perhaps needing visual artists, don’t seem to be in the practice of shelling out a lot of money for the field. Their average salary range is about $48,757 – $81,585.

All of these factors vary: your education, skill, employer, and other things determine that number. Want to find out for yourself? Have a look at salaries and other info here.

How a Visual Designer Differs from Other Types of Design Jobs

As I said before, a visual designer is a good blanket term for those that engage with digital designing. However, there are key differences from those in other, similar positions. Those that work on a site’s user interface (UI designer), a web designer, and a UX designer all differ in their responsibilities.

Web designers also need to know how to use the tools of a visual designer, like the aforementioned suite of Adobe products, and must keep a clear channel of communication with the design head and the visual designers to make sure everything is up to speed.

Visual designers compared to web designers, don’t narrow their field to just the website’s function. They need to be in constant communication with the appropriate parties to make sure the overall vision of the site or app is fitting together nicely.

When it comes to User Interface designers, they are the ones on the design team who make sure that the potential user or visitor to the site in question is able to navigate it easily and get the most out of the site or app’s message.

Although visual design owes much of its existence to graphic design, it isn’t the same field. Graphic design can be used as a catch-all term that can refer to anything designed by people for print or digital. Specifically, though, the term has been in use for nearly one hundred years.

Graphic designers are the ones that actually develop the layouts of the products, deciding where the pictures or typeface goes in the actual project. A huge difference between the two professions is the difference in salary, where visual designers seem to make significantly more than graphic designers—nearly a $30,000 difference.

The study of ergonomics, or human factors, the ways that humans interact with systems, is also a huge part of user experience. Visual designers and UX designers must work together to make sure that the perfectly honed user experience looks well and follows the aesthetic themes of the project.

I found this cool little site that offers a comprehensive class in visual design called the ‘Visual Design Blueprint’. In the class, you can start testing out and creating your own personal brand, something that seemingly everyone needs on the internet nowadays.

The Visual Blueprint will simulate clients for you, making you design things for them in different scenarios as well, simulating the daily life of a professional visual designer.

Their checklist for you if you want to know if their program is for you is as follows:

After the course, you will be rewarded with the ‘The Skillcrush Visual Designer Blueprint Official Certificate of Completion’, which they say is the perfect addition to a professional portfolio and your LinkedIn page.

Although perhaps not for everyone, if you’re curious about a profession in visual design and have no idea where to get your start, perhaps try perusing their site to get a better feel for their programs, course instructors, and policies.

It seems as the years go on, becoming a visual designer is a more viable option than becoming, say, a graphics designer. The narrowness of the field leaves much to be desired if a company is looking for a more general, broad, and flexible position within their company.

An affinity for these art programs, the different schooling options, and the knowledge of the appropriate software will shed some light on what a visual designer truly is and if it works for you.