You are here: Home / Experts / Explore The Many Worlds of Shigeru Miyamoto 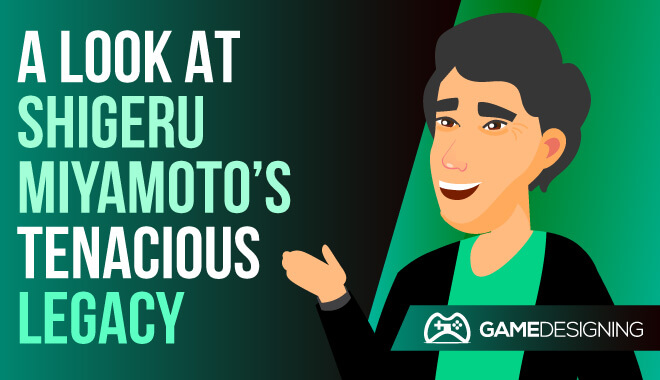 When you think of video games, what comes to mind?

Sure, you probably think of a few modern examples of game protagonists. However, the chances are good that you thought of Mario, Donkey Kong, or Link. These characters and other Nintendo creations are synonymous with video games.

But what creative genius hatched all those ideas into iconic characters? The incomparable Shigeru Miyamoto. Let’s explore his background and what makes him the linchpin that holds gaming together.

Born on November 16, 1952, in Kyoto, Japan, Shigeru Miyamoto was always driven by art and creativity. A particularly poignant and stark example of his childhood’s influence on his future career is his forays into the Kyoto wilderness, which directly inspired him to craft the first game in the Legend of Zelda series.

Initially aiming to cut it as a manga artist in the mid to late 1970s, Miyamoto joined a little-known company called Nintendo as its first artist. For the first three years of his time at Nintendo, he was their go-to artist.

Luckily for Nintendo, it had just stumbled upon its golden goose.

Miyamoto immediately began hatching creative plans for his pet project. To anyone familiar with Nintendo’s first arcade hit, Donkey Kong, you know what happened next.

A plumber, an ape, and a princess.

The combination would take Shigeru Miyamoto from amateur game designer and talented game artist to the top of the heap.

The 1980s was Miyamoto’s decade to shine. With the Nintendo Entertainment System (NES) development, Miyamoto had more advanced hardware to work with. Out came Super Mario Bros., The Legend of Zelda, and Kid Icarus.

By this point, many game developers would be minor celebrities, content with their work. Not Miyamoto. He doubled down, working extra hard, eventually going through game after game on the Super Nintendo Entertainment System, followed by smash success with the Nintendo 64.

Sequels and iterations of his beloved creations made their way from the 2D world to fully 3D, captivating a new generation of gamers. We all know what happens next. The Wii, GameCube, Nintendo Switch. Where does this guy get his energy!?

Where to begin with the games credited to Miyamoto’s creative brain? There are a lot, but let’s narrow down some of our favorites.


After Donkey Kong, this title cemented his legacy on NES. Focusing more on a narrative (the classic ‘Bowser steals Peach’), Mario didn’t focus on high scores like past arcade games. The simple concept of moving from left to right, along with the multiplayer help from our second favorite Italian plumber, Luigi, vaulted Super Mario Bros. into legend.

The Legend of Zelda


Bringing his adventuring spirit and high fantasy together, Kiyamoto developed the first Legend of Zelda game in the mid to late 1980s. Link, our hero, must quest through different screens filled with enemies to save the titular princess from the clutches of evil.

This concept spawned almost 20 main games in the series.


If you didn’t know that Star Fox existed, was popular, and spawned future games, would you believe Miyamoto dabbled in flight combat simulators? Probably not. Up until that point, he mainly focused on platformers.

In 1993, Nintendo and Miyamoto brought 3D graphics to the Super Nintendo in the iconic game, Star Fox. The Super FX chip helped the team at Nintendo create more three-dimensional graphics and game mechanics.

What followed was the beloved story of Star Fox and his pilot pals, Slippy Toad, Falco Lombardi, and our favorite barrel roller, Peppy Hare.

Although many see Miyamoto as a creative genius, writing, designing, and implementing fantastic characters into likewise fantastic games, Miyamoto himself says that his design philosophy is more than just being a good artist.

“People have paid me a lot of lip service, calling me a genius storyteller or a talented animator, and have gone so far as to suggest that I try my hand at movies, since my style of game design is, in their words, quite similar to making movies. But I feel that I am not a movie maker, but rather that my strength lies in my pioneering spirit to make use of technology to create the best interactive commodities possible and use that interactivity to give users a game they can enjoy and play comfortably.”

Miyamoto nails precisely what makes his games and systems successful. His undefeatable spirit, optimism, and belief in his creations spur on his continued success well into his 60s.

Something unique that can’t be said for other game studios is that Nintendo totally ignores focus groups. Instead of seeing if the new Far Cry or Assassin’s Creed works with a particular demographic, Shigeru Miyamoto just tries the game himself.

Is it fun? Does it work? Will it satisfy Nintendo players?

He has all of this in mind. If it passes muster, then Miyamoto is satisfied with the product.

How to even begin to describe his long-lasting legacy? It’s iconic and perhaps one of the most influential ones in game history. It’s improbable someone with his design philosophies, and spirit will come around in our lifetimes to topple the king of Nintendo.

How Does Miyamoto Come Up with His Ideas?

Once the shift towards narratives in games became popular, Miyamoto started to apply everyday activities into his game designs. Simple aspects of life, like walking his dog, or shopping, inspired him to bring real life into the virtual space.

While there’s no ‘dog walking simulator,’ Miyamoto dedicated himself to bringing real-life experiences and making them into captivating stories and immersive games.

The Importance of Making A Successful Game

For Shigeru Miyamoto, the most crucial aspect of game creation is innovation and its unique idea. He shuns rehashing old ideas and played-out concepts. That’s what sets games like Donkey Kong Country and The Legend of Zelda: Ocarina of Time apart from titles like Call of Duty and Halo.

This is where Shigeru Miyamoto’s thinking goes. And it has made gaming a wonderful world to play in because of it.