You are here: Home / Experts / John Carmack: How He Revolutionized FPS Games With 3D Premier Graphics 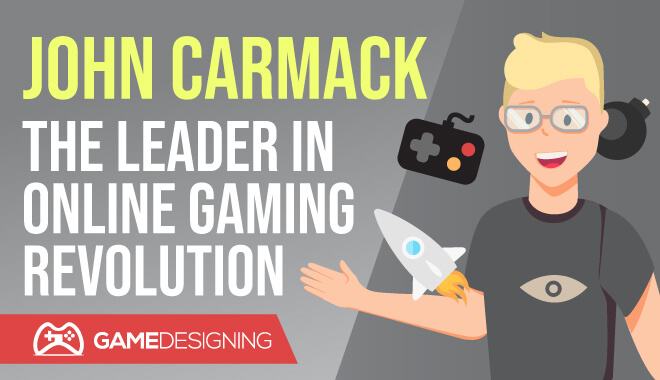 If you consider yourself a serious gamer, chances are that you know the name John Carmack. Even if you aren’t familiar with the name, don’t worry about your gamer cred going down. You definitely know his games.

Doom, Quake, and Return to Castle Wolfenstein have all shaken the foundations of first-person shooters, leaving an indelible mark on the industry and changing what it means to play games. Let’s see where the genius of John Carmack began.

Born in 1970, Carmack had early exposure to games like Space Invaders and Pac-Man, changing the way he viewed games and entertainment on the whole.

Carmack quickly gained interest in computers from these various arcade encounters, and they would leave a lasting effect on him and the video game industry later on.

Eventually, he made his way to the University of Kansas. However, he and university life weren’t meant to be, and he ultimately left after two semesters. He figured (rightly so, as it so happened) that earning his keep as a freelance programmer could give him better opportunities to grow as a software developer.

Here are some of Carmack’s most notable titles.

The player’s main goal? Escape, as well as gun down as many Nazis as possible. The game was filled with guns, secret rooms, and even an appearance by Adolf Hitler in mech form. Sure, it was an insane concept, but it worked. Most importantly, it was a hell of a lot of fun.

Undeniably John Carmack and id Software’s most iconic title, Doom, made big waves in the early 1990s. Playing as a space marine violently fighting back hordes of hell beasts, players could partake in fast-paced, violent, and downright fun gameplay.

Carmack and his team from Wolfenstein went to work to create their next game. Carmack was weary of Wolfenstein and desired something fresh. Carmack and fellow team member John Romero developed the idea that would become Doom: a character using advanced tech to fight demons from hell.

Drawing on horror and sci-fi influences, the team went to work and quickly crafted one of the most beloved and fun FPS games ever created. Doom was rebooted in 2016 and most recently had Doom Eternal release for all major systems.

Thanks to Carmack, Romero, and the rest of the development team, a little something called the ‘death match’ was born. Players would face off and attempt to best their opponents using all of the insane weaponry and hardware available to them in the Doom games.

If a formula works, why deviate at all from it? Quake is a first-person shooter set in a twisted medieval world inhabited by grotesque monsters and enemies. The player has to navigate through this scary environment while dodging and destroying all the while.

Quake is where id Software really increased its technology output. Quake was the first id Software game to use real-time 3D rendering.

So what is John Carmack’s game development philosophy? What gets him up in the morning, determined to make some of the most iconic games in the world of computing?

When talking about Quake specifically, John Carmack laid out his entire method of thinking about game development:

“It’s looking at a game in its fundamental sense of what you’re doing has to be fun. It’s not a matter of beating the game into submission or accomplishing something, the actions have to be fun. There has to be something that you wanna just go out and do. People don’t play softball because they want to beat the game of softball; it has to be an action that’s fun by itself…”

To be able to comprehend the sheer impact that Carmack and id Software had on gaming is nearly impossible. But we’ll still try.

If it weren’t for developers like him and John Romero, first-person shooters wouldn’t have been as widespread. Sure, it’s a generalization, but we believe it 100%. The great gameplay, fast-paced action, and crazy scenarios added a lot of creativity, charm, and violence to games that were just downright fun.

His Role in Oculus and Why He Left

If you didn’t know, John Carmack had a pretty significant role at Oculus, the company responsible for popularizing the rise in VR games.

Carmack stepped away from his in-depth role at Oculus to dedicate more time to his work with AI. Specifically, artificial general intelligence. This is essentially ‘strong AI,’ where a programmer attempts to create AI that can mimic or perform actions that a human being can. If anyone can master it, it’s the programming and creative genius, John Carmack.