You are here: Home / Experts / Meet Yu Suzuki, The Non-Player, Whose Always Thinking in 3D 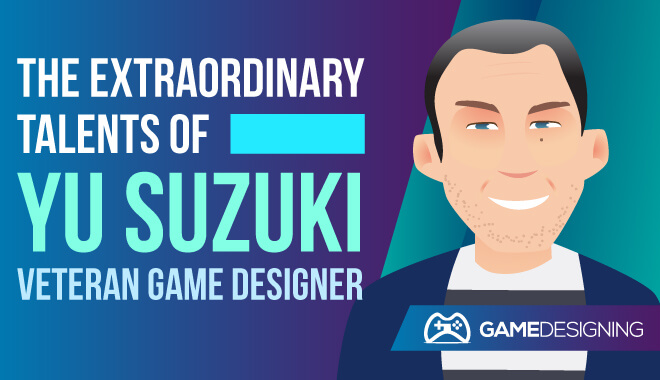 Born in Kamaishi, Iwate, Japan, in 1958, Yu Suzuki was in the perfect spot to join the gaming revolution. He joined up with Sega in the early 1980s and started making games. His first, a boxing game called Champion Boxing, paved the way for one of the most influential fighting games ever to be released.

Although he started at the company as a programmer, he quickly rose in the ranks at Sega, especially in his first year there.

Suzuki was ‘always thinking in 3D.’ As you’ll see, this set his ambitions and game output apart from many traditional game designers of the day.

Here are some of Yu Suzuki’s iconic games and contributions to the video game industry.

While the final game in the Shenmue trilogy was met with harsh criticism upon its release, the first two games are excellent and influential enough to make the series iconic in and of itself.

In the games, you take on the role of Ryo Hazuki, a young Japanese man on the trail of the evil Lan Di. In between story elements, Ryo has a fantastic amount of open-world control. For its time, in the late 1990s and early 2000s, the concept of wandering around Hong Kong, getting odd jobs to make money, gamble, and talk to every citizen was revolutionary.

While it may show its age by today’s standards, the Shenmue games are incredibly influential.

Created in collaboration with Seiichi Ishii (who would go on to develop Tekken), the Virtua Fighter games were landmarks in 3D polygonal design. The first game in the long-running series, released in the early 1990s, is often cited as being the first fully-fledged 3D fighting game.

Suzuki’s game design philosophy comes from a place not often seen in the video game industry: from a completely technical, no-nonsense viewpoint. Suzuki saw working at Sega as a job, a job he’d be good at. He took his love of cars, motorcycles, and sports to create a slew of perfectly playable games.

He started his own company, Ys Net, and now serves as a consultant for Sega, rather than taking on the role of game director. Although he originally planned to leave for over a decade, it seems Yu Suzuki can’t quit them.

If his thoughts of returning to the Virtua Fighter series have any merit, we’re glad he chose to keep his ties to his longtime company.

Yu Suzuki eventually went on to gain funding for the ambitious, long-awaited threequel, Shenmue II. Instead of developing it under Sega, Yu Suzuki, Ys Net, and Deep Silver teamed up to come up with the anticipated title.

Suzuki launched a crowdfunding campaign for Shenmue III in 2015. After the announcement at that year’s E3, the $2 million goal was quickly surpassed, raking in over $6 million by the end of the month. The game was released in 2019, 18 years after Shenmue II.

Although critics said that the game felt dated, and some aspects were tedious, hardcore Shenmue fans were delighted to see Ryo Hazuki’s return, looking for his father’s killer.

Why He Doesn’t Play Games

Yu Suzuki is a unique case in game design. He’s a fantastic game designer who doesn’t play games. He doesn’t even like to play games. This personal preference frees up a lot of time and creative flexibility.

Instead of playing games, Yu Suzuki goes all-in terms of developing what he wants to develop. Regardless of trends, Suzuki sticks to his plan.

Instead of joining Sega due to believing in the company’s mission of wanting to make his mark there, he instead chose Sega for an entirely different reason. It was a mixture of Sega offering him more time off than other companies and the people who worked there.

Thanks to flexible vacation days, we now have Virtua Fighter and the Shenmue series.

What Changed in Game Design

A few things have changed since Yu Suzuki’s heyday at Sega. Back when he was pioneering 3D technology at the company, he had an entire squad of designers flanking him at every turn. In his most recent project, Shenmue III, Suzuki built from the ground up, creating his team from scratch.

He rather enjoyed working with a small group, which could more easily communicate and reach goals.