You are here: Home / Gaming / Pay to Win Games Are Taking Over: How Much Are You Willing To Pay? 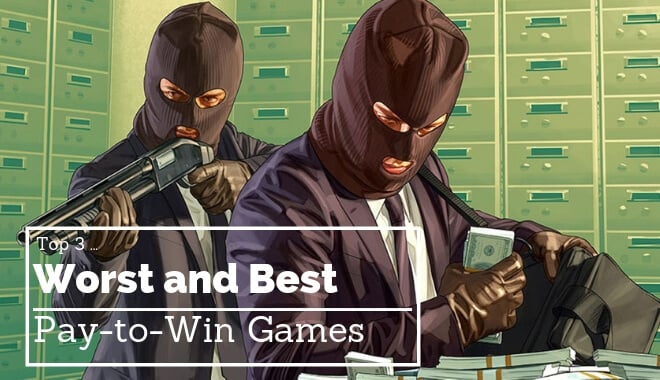 ‘Pay to Win’ has become an infamous term in the gaming world. Users and players willing to shell out a few extra bucks to access features that are normally unlocked as the game progresses can give some serious advantage, especially in online games. This presents an unfair balancing issue within the online communities.

What if a gamer is dedicated but doesn’t have the cash to pay for a rare weapon or endgame upgrade early on? It irritates gamers to no end and unfortunately doesn’t show signs of stopping. Game companies can earn more income for eager gamers trying to avoid grinding in games.

The 3 Worst Pay to Win Games


APB, an MMO where ‘cops and robbers’ come to life, has been an outlier in this field due to its reskinning of weapons already in-game and selling them as new. Although sporting a deep customization system and no shortage of players, even in recent years, opinions are still somewhat sour.

Reddit user Minty_chu chose it as their pick in the ‘Most Notorious “Pay to Win” Games’ thread on r/gaming:

“APB Reloaded is my #1 pick.
Tried it for half a week, everyone who played in this game had a DRASTIC upper hand. It was absurd and halfway from unplayable if you didn’t drain your wallet.”

This is a terrible thing to come across in-game. You’re either forced to grind out levels to get the same weapons that other gamers can just open their wallets for and get instantly. And even THEN, the weapons are nothing but reskins. It’s one thing to not play a game for years, come back online and see everyone has gotten great gear.

That’s the nature of the beast. But to see gamers buy items that need the effort to acquire getting them instantly is disheartening, and I could see why many people would be tempted to leave these games in droves. In this case, APB proves to be in its own genre: pay to win games.


Based on the 1997 strategy game Dungeon Keeper, the *new* Dungeon Keeper has earned an insane amount of criticism for its crippling pay-to-win system.

When confronted with the issues, the developers said that they didn’t intend to make it pay to win. They went on to claim that everything in the game is free; that one can start the game and acquire all goods and items for free.

This statement, at face value, is technically correct: anyone can play this game for free and get everything. However, the odds are so stacked against those who don’t take advantage of microtransactions in the game that they might as well not play the 2014 strategy game.

The time it would take to grind for those items that can be bought in seconds is staggeringly high. It seems to me that EA was just, (unsuccessfully), trying to save face.

Luckily, the game’s developers have since expressed regret over their reliance on microtransactions and were forced to add more explanation about the pay-to-win features on the App Store and other places by the British ASA.

I wonder if getting outside corporations involved with gaming practices is a good or bad thing going into the future, but I’m personally glad that the developers were held accountable for their practices.


Neverwinter is a free-to-play MMORPG set in the Dungeons & Dragons universe. It received mixed reviews from critics and was also criticized for its pay-to-win model. A member of r/gaming wrote:

This is a heartbreaking view on the pay-to-win games out there. In the old Neverwinter games, there was no pay to win at all; players had to level throughout the story and actually earn their gear or spells.

I remember playing Neverwinter Nights years ago and enjoying going on quests, discovering hidden items and areas, meeting interesting characters. What happened to it? It pretty much takes the actual game out of the game, making it just an exercise in opening your wallet to balance the playing field.

The 3 Best Pay to Win Games


A true online classic, 2D side-scrolling MMORPG Maple Story was released way back in 2003. A beloved game by South Korean company Wizet with publisher Nexon, it has received nearly $3 billion in revenue over its lifetime. However, as dedicated as the fan base can be, there are some players that long for those lost days.

“Friends of mine have even told me that they had to abandon Maple Story after experiencing frustrating issues with the pay to win model. They needed cubed items and couldn’t get them, leaving others to acquire the newest content, leaving my friends in the dust. It takes the very soul out of the game.”

Wizet shouldn’t have to resort to expensive upgrades that take the challenge out of everything and alienate its player base, especially with all of that revenue. Talk about greedy.

Games should create a challenge and balanced leveling systems based on a player’s game time, not their wallets or their willingness to get the best gear without the proper work being put in. Game developers, unfortunately taking advantage of gamers’ passions for these titles, seem to be making off like bandits.


The wildly popular Clash of Clans, unfortunately, suffers from the pay-to-win model in its own way. Join one of the many clans and have a go at building your own village, all including barbarians and strategy game goodness.

However, if you want to build your buildings faster, or train more troops quickly, you have to pony up the cash in the form of ‘gems’ in-game.

A famous ‘Clash’ player, Jorge Yao, had achieved notoriety on the game’s leaderboards, but at a great cost: Spending $3000 on Clash of Clans within the first few months of his fame.

Gamers are forced to either sink the money in or spend hours—like Jeorge Yao who would often play for 48-hour stretches of time—trying to defend against other players and getting your name on the top of the lists.

Amusingly enough, someone had calculated what it would take to essentially ‘beat’ the game from its starting point, totaling up to an unbelievable $15,000—$18,000 price tag.


A free-to-play online coop game, Warframe was released in 2013 on PC, and PlayStation 4, and 2014 on Switch and Xbox One. Right now, it’s one of the most played games on Steam, no mean feat.

The developer, Digital Extremes, was very hands-on with the community, helping it turn from a mediocre release to a great gaming community that flourishes online. The game includes shooting, parkour, and classic role-playing elements. Much like the Monster Hunter series, the player is in fast-paced combat and grinds for gear.

The pay-to-win model is also found in gems like Warframe.

An anonymous user from r/gaming in the ‘BEST pay to win games’ thread on r/gaming states:

“Warframe’s model to pay to win is somewhat unconventional. You can cut out the grinding, sure, but the bonuses you acquire will help everyone in the game, as well as your money going directly to the developers so they can tweak issues or even add more content to play around with.”

The passion displayed by players and developers alike for the betterment of the game is a great thing to see, especially in light of more toxic gaming communities. Perhaps the pay-to-win model works better in a coop game rather than a head-to-head multiplayer game where the stakes are high every time you strap in to hunt down the other team?

Pay-to-Win Games by The Numbers 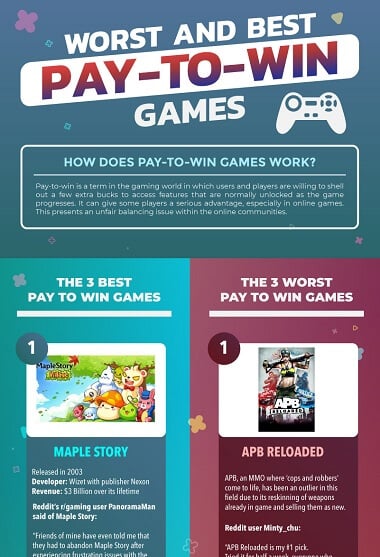 Reading cautionary tales about pay to win models has worried me. Tales of family members paying time after time in certain games to acquire newer or more powerful weapons or armor have some people left in debt. You shouldn’t have to worry about your loved ones falling prey to these pay-to-win models.

Like I said before, games should be a balanced experience for everyone, not just the privileged few who can afford upgrades via microtransactions. Some players even enjoy the grinding, actually playing the game the way it was meant to be played and acquiring all items, secret and rare. The pay-to-win model can harbor good and beloved games, but at what cost?