You are here: Home / Gaming / Console vs PC Game Design (Pros and Cons of both) 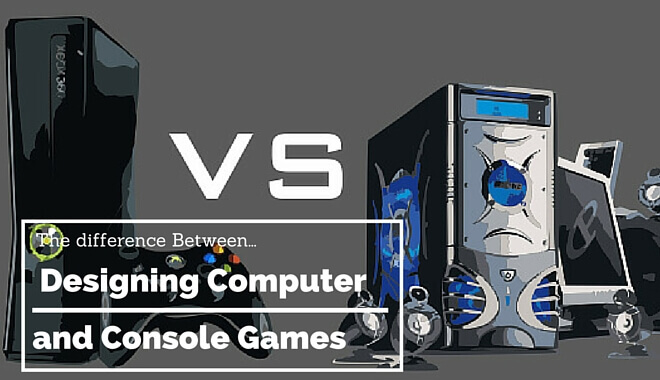 They each have pros and cons as well as different prices. We’re going to outline a few key elements of the game design process that might help you make your decision. Let’s dive right in.

There are a couple of “wars” you’re probably aware of. First, there’s the console war, but we aren’t as interested in that today. We’re talking about the grueling console vs. PC war.

Five years ago, reports were published that seemed to indicate computer gaming was on its way out. “It is dying,” they said.

Well, that wasn’t the case. And now, in fact, the opposite is true. A more recent report indicates that PC game sales could actually overtake console game sales this year, in 2016, by 1 billion dollars.

We don’t know what to believe anymore. Does anyone know what they’re talking about?

The important takeaway from this is: don’t get scared by market trends. If you wanted to design games on the PC five years ago, and you decided not to because the “market was dying,” you’d be kicking yourself now.

The same thing goes when you consider the latest report on the current trend. Just because PC is on the up and up now doesn’t mean you shouldn’t try and design games for consoles. There’s no real way to predict what will happen.

If you have a preference, go for that!

With the fiscal projections out of the way, let’s take a look at the differences in the workloads of designing for PC and for consoles. Let’s start with consoles.

This is a good time to be a designer because the framework used to develop consoles has morphed considerably since the old days.

There are some fundamental differences, and we’ll look at those now.

When designing for a console, you are working with finite hardware capabilities and concrete specs. Sure, this is more limiting than the PC’s adjustable capabilities. But it also makes it easier for the designers (you).

You are building a game within very specific parameters. You don’t have to compensate for differences in video cards or processors. Every Xbox One is, from a game design standpoint, exactly the same.

The variance comes from the different console options. Designing for PS4 is different than designing for Xbox One. Typically, especially with bigger games, the workforce is separated into dedicated, console-specific teams.

You’d be assigned to the PS4 team, or the windows 10/Xbox One team. On smaller development teams, everyone might be porting to a couple of different systems.

As we mentioned above, the primary difficulty of designing games for the computer is working around all the hardware variables. The goal is to design great gameplay, certainly, but you want it to look great and run smoothly too. To do that, you have to keep these different specs in mind as you’re building.

The video card, the sound card, the processor, etc. can vary substantially from the low-end tech gamer to the high-end tech side of your audience. The game has to play well across the whole spectrum.

Console exclusives are where they shine. Games like Ghost of Tsushima and The Last of Us Part II make PS4 a standout.

Both consoles and PC offer some great VR options.

Upgrading PC aspects can be costly and may be necessary, as everything is always going out of date sooner rather than later. Consoles always get built-in updates for their software.

On PC, you can play games that are over 20 years old, while consoles may be able to do this if there’s an exclusive license agreement with the proper companies. Many red tape issues and software limitations stop consoles from being able to have as much freedom with their titles.

There are other factors you’d want to consider when it comes to game design. It might surprise you to learn that the differences diminish the further down this rabbit hole we go. Factors like budget, timeline, the difficulty of the work, and team size are all worthwhile considerations.

But there isn’t a “PC way” to do it and a “console way” to do it. These elements are all determined by the scope of the game being designed.

If you have a big MMO game, even a AAA game with a big budget and a large team, it could take several years. If you have a shooter, it might only take up to two years.

Think Call of Duty–sure, we see a new one every year, but it’s two separate studios, taking two years apiece to build a game, with a staggered release strategy.

Smaller games will take less time, and they are a more manageable place to start your game-developing career.

As far as coding language goes, for AAA games the standard is typically C++ regardless of the intended port. In smaller games, you’ll see greater variety, like java or flash.

All of these factors, like difficulty and budget, and team size, depend almost entirely on the game and the developer. It isn’t specifically tied to consoles or PCs.

Consoles and PCs have wildly varying prices. While consoles usually stay in the $200-$400 range, a PC worth playing a modern game will typically cost significantly. This can be a significant roadblock for gamers on a budget.

Controllers for game systems are a big price point in the comparison between PC or console. While PCs have mouses, video game consoles have their patented controllers, which usually retail for around $60. PCs can get away with using a dollar store mouse, but consoles need these robust controllers.

Games vary in price. PC games (not counting Steam sales), can run from ~$30-$60. Nearly every major console game release will always be $60.

So there you have it. Our best advice is to pick the one that’d you rather spend all your time working on. The size of the game is what will influence a lot of the workload variables, and the size of games varies for both consoles and computers.

System specifications will be easier to cater to as a console designer, but that doesn’t mean it will be an unbearable task for PC.

And as valuable as consumer data for games is, it isn’t infallible. Who knows where games will be in another five years? That’s why we recommend picking your favorite.

Is PC gaming better than console?

PC or console depends on a lot of factors like price, personal preference, and more.

Is console gaming cheaper than PC?

Are shooters better on console or PC?

A broad consensus of gamers is adamant that shooters are better on PC vs. console because of the greater control via mouse and keyboard.

Is PC or console more popular?

Officially, the PC is more popular. Over half the gaming population plays PC games via laptop or desktop computer, while 43% of gamers use consoles.

Is ps4 better than PC?

Aside from the PS4 exclusives, the PC offers a broader range of different games and Steam sales.

Is gaming on PC better than console?

It depends on your play style. If you’re into modding your games, playing strategy titles, or MOBAs, then PC is for you.

Should I get a PC or console?

You need to take into account your different preferences, as well as your budget. If you have enough money, PC gaming can scratch a gamer’s itch. However, consoles these days are very advanced and impressive, as well as having great exclusive titles.

Is PC gaming cheaper than console?

Usually not. PCs vary by price and have more specific requirements for games that the gamer will have to be aware of. Consoles already have the software and requirements built-in, so you press play and go.

No, in fact, it’s more popular than ever.

Is gaming on PC better than console?

If Fast-paced shooters like CounterStrike and Team Fortress 2 are more your style, then yes.

Is a PC better than a console?

It depends on what your budget is and what types of games you want to play. If you’re more into console exclusives and controllers, then the console is more your style. PC’s performances are overall, more impressive.

How can I turn my PC into a console?

You can hook up current-gen controllers to your computer and configure the games you play on the PC to respond to the controller. This allows you to control a PC game like a console title.