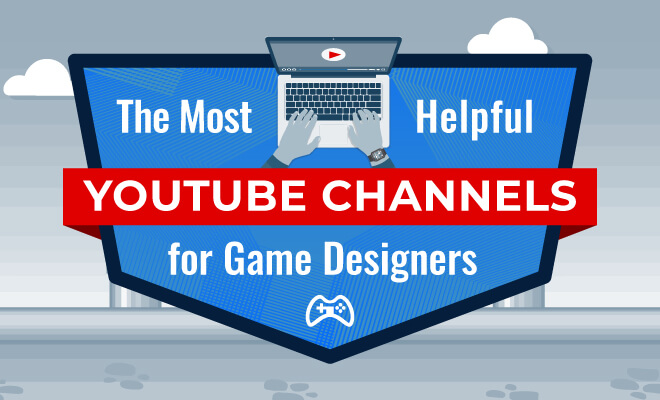 There’s no doubt that if you’ve been anywhere near the internet in the past 11 years you’ve gotten a healthy taste of YouTube.

It’s more likely you’ve invested hours of your life, over the past decade, watching videos.

Whether it’s a heroically viral video of a pig saving a goat or a lesser-known video of your favorite indie rock band, you’ve spent some time lost in moving-picture distractions.

Well, a good thing is about to get even better. YouTube has a real treasure trove of channels from which aspiring game designers could really benefit.

This article has 12 really helpful YouTube channels. The breadth of topics these different channels cover spans the whole game industry.

You’re bound to find at least a few channels on this list that you’ll find sub worthy (“sub worthy” as in “worthy of a subscribe”…not ”less than worthy”).

Extra Credits is a channel that covers all-things game design. They have videos about how games could be made better.

They also delve into game design schools, and game developer companies. No aspect of games is off-limits on this channel!

Here is a great video to get you started. This video talks about how games get the idea of C’Thulu wrong, and what the gang at Extra Credits would do differently.

It was released by Extra Credits over a year ago, but it’s very appropriate now as we just saw the release of the Whisper of the Old Gods expansion for Hearthstone.

An expansion, for those who haven’t played it yet, that is replete with a C’thulu knockoff. The expansion houses a card, C’Thun, and it can be a real doozy.

Sunder’s channel is all about level design. Typically, the host, Sunder, will pick a level from a specific game, and unpack the level design to figure out what’s hiding in there.

He also discusses his own insights into the “how” and the “why” of the game developers’ choices.

Check out one of his newer videos, featuring Monster Hunter 4. In this video, his focus is all about the adjustments made to vertical-level design throughout the franchise.

This YouTuber offers up some off-the-cuff reviews for entire games, or at least most of the game. He spends time commentating on games ranging from Mario 64 all the way to Dark Souls.

He splits his time between premeditated, scripted game breakdowns, and spur-of-the-moment commentary.

He manages to bring a fairly in-depth review to you in a relatively short amount of time. Here is his channel homepage.

Egoraptor is a hit YouTuber that “makes cartoons about video games.” We could listen to him all day.

Be warned, he can be a little bit explicit. His fun editing style, mixed with quick, animated cartoon scenes, makes for very entertaining, highly-watchable content.

A real gem of a series is Egoraptor’s Sequelitis. This series compares two sequels in a game series, and gives his candid opinion, even if he knows it’s one some viewer won’t want to hear.

He has a refreshingly unique way of looking at games. His steady stream of humor might carry you through a couple of his videos before you even realize it.

Check out his video comparing Zelda: A Link to the Past with Ocarina of Time.

YouTuber Keith Burgun brings topics that are more cerebral to your computer screen. The best part is he does it in just about three minutes.

If you’re looking for some interesting food for thought to mull over, pop on one of his videos. He deals heavily with ruleset design for games.

His videos can be a bit dense as far as material goes, but don’t let that deter you. It’s worth it to start at the beginning of his 3 Minute Game Design Series, so here is a link to Episode 1: The Introduction.

You probably have an older game and a dated console that you love. Every once in a while, maybe it’s a snow day, maybe it’s during a lull in-between new releases, you will dust off the old-gens and pop in one of your favorite games from a simpler time.

You start to play… and you realize that the game could have done so many things better! Or maybe it doesn’t occur to you, and you float in a nostalgia bubble all the way through the game…

Either way, you’ll want to check out SnomaN Gaming! He describes his channel as the “Home of Good game Design.”

So he’s really doing a 180 on his typical modus operandi by showing the bad game design of Donkey Kong 64!

In it, he highlights what RARE could have done differently to make Donkey Kong 64 (one of his favorite games when he was young) a much better playing experience.

Game Soup is a great channel that takes a look at various games and breaks them down with a “long-form analysis.”

The videos cover everything from battle mechanics to video game difficulty. Sometimes they’ll restrict their scope to looking at the inner-workings of a single game.

Other times they’ll pull a bunch of examples to illustrate a cool point. A particularly cool video they do is their examination of ingenious solutions in video game designs.

It’s a great video to start on. Basically, it describes a bunch of game mechanics that started as bugs during development.

The dev teams, instead of trying to generate a fix, cleverly worked the bugs into their games.

One early example they use is the Space Invaders game. The slow pace of the creatures, in the beginning, was actually a matter of insufficient processing power.

The designers didn’t originally intend for the enemies to speed up as their numbers dwindled.

Instead of trying to compensate for the speed increase, they just worked it into the game as a gradual difficulty increase. Pretty cool! There are modern examples too, so give it a look!

What’s With Games takes a look at all kinds of game questions. They use a titular format of “what’s With” and add the subject of the video to the title (i.e. What’s with random encounters?, What’s with falling damage? etc.).

Their insightful exploration of different topics, coupled with the broad variety of topics covered, makes them a valuable channel to watch.

Their videos are usually around six minutes long. Check out their video What’s With Cheating and see if it scratches you where you itch.

There are a bunch of channels out there that offer tutorials and tips on how to do certain things when using specific game engine software.

The Unity Channel, for example, has YouTube tutorials on everything from shooter mechanics to mobile development.

In addition to the training, they also have videos that showcase some cool things being done by other developers.

They talk about their process and techniques. It’s a great way to sneak-peak into the minds of professional developers and serve as valuable how-tos for navigating the software on your own.

Here is a cool (albeit long) video of character creation techniques for the game Paragon.

This is a cool channel, hosted by one Mark Brown, a man with a very pleasant voice. The Game Maker’s Toolkit channel is host to some great content.

He recently made a very interesting video on a debate that always explodes over the internet whenever another Dark Souls iteration comes out.

He makes a very well-informed, articulated argument about the deliberate game difficulty decisions of developers.

The Cherno Project channel is a really cool, really in-depth look at game coding. The host takes a game and, over a series of episodes, recreates the game from scratch.

He shows you line by line the code that went into the game. Check out his first installment in the series, involving the Realm of the Mad God.

He leaves nothing out. He takes you through the game’s creation, quite literally from scratch. This could be a valuable learning tool, giving you the big picture but also the more nuanced touches to game development.

This is a series with a unique spin, it’s the only one on the list to focus on gaming and music. It’s a series on the ESVLB Gaming Channel.

The host talks about specific musical aspects of games, like the key signatures of songs or the use of different sonic elements.

But he also talks about music’s role in games in a broader, accessible sense for those of you who aren’t musically inclined.

The series starts with an interesting video involving a musical breakdown of banjo Kazooie for the Nintendo 64.

Thanks to YouTube’s algorithms, you’ll have plenty of worthwhile suggestions as you watch the videos above.

It’s very easy to get lost in some of these videos, as many of these YouTubers do a real bang-up job. YouTube has become a huge resource for gamers and game developers alike.

You have so many options, and your pick of video styles and content. You can go with the dryer, info-packed videos, or you can pick the light-hearted, yet informative videos. There’s something for everyone!

There are too many to count. There are so many channels created daily on YouTube, hundreds of those containing gaming elements. Keep in mind that the bar for ‘gaming’ on YouTube isn’t strictly defined, so it’s tough to pin an exact number.

Who is the biggest gaming YouTuber?

PewDiePie is the biggest gaming YouTuber by a longshot. PewDiePie is an iconic player of games, with a dedicated and passionate fanbase, giving him a massive subscriber count of 103 million! That is a piece of excellent news for

No way! If anything, it’s increasing at a quick pace. New channels are created every day, adding new content all of the time.

Also, the inclusion of the ability to stream game playing for subscribers keeps YouTube current. Keep in mind that channels like PewDiePie, ever-growing in subscriber size, is one of the best gaming YouTube channels.

As long as great gaming YouTube channels are at the forefront, it seems highly unlikely that gaming will ‘die’ on YouTube.

How do you become a popular gaming YouTuber?

Many steps go into this. It, unfortunately, isn’t as easy as it may sound to some.

First and foremost, you have to find your niche or your market. Who are you playing for? What games do you partake in? Finding your foundation is vital.

You need to get the proper recording and streaming equipment. If your channel is just a screen playing the video game, that won’t bring in viewers like someone who is on screen, actively commentating on what’s going on onscreen. Add some personality to your channel!

Use relevant keywords when creating YouTube video titles and descriptions. This can match up with search terms that users will type into their search bar. For example, changing a title from ‘Horizon: Zero Dawn Gameplay Part 1’ to ‘Horizon: Zero Dawn Best Weapons’ or referring to a particular part in the story may prove useful.

It would be best if you did a lot of analytical work. This means going over likes, comments, and subscriber numbers. This, in essence, shows you what works and what doesn’t.

Promote your channel. This is crucial. This can be done by having YouTube gaming channels giving you a shout-out, eventually tailoring your gameplay to a more general audience. It all depends on your style and aims as a gaming YouTuber.