You are here: Home / Learn / The Pros and Cons of Ambient Occlusion and How to Use It Effectively 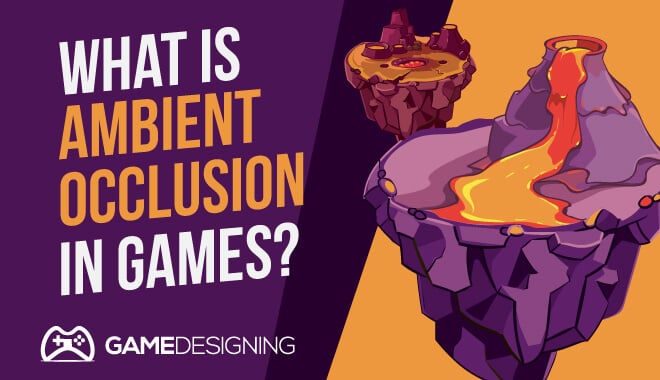 If you are familiar with gaming at all, you have probably seen this term in the ‘options’ of some games’ graphics settings. Usually either turning it on or off or choosing different intensity levels. It sounds like a fancy term, but it really isn’t that mysterious.

As far as I’m concerned, it is a setting that really fleshes out a gaming scene. But what is ambient occlusion, other than some graphical setting in the menu?

To break it down as simply as possible, let us look at the term occlusion, which generally would mean (in graphics), the amount of something or some element concerning lighting in the scene.

Combine this into ambient occlusion, it illuminates all of the different assets within the level or scene based on other geometric assets, (i.e. character lighting being darker because the table in the scene is receiving more light within the scene).

An ambient occlusion is a trusty tool in which game developers and designers shade a scene and set up lighting to be as realistic as possible.

‘But Can It Run Crysis?’

In 2007, Crysis became one of the first games to include ambient occlusion. It was subsequently praised for its impressive graphics and lighting, leading to ambient occlusion being the watermark in which game lighting is usually modified. It even spawned a meme, ‘But can it run Crysis?’ stemming from graphics card reviews.

As good as they may be, people would spout ‘…but can it run Crysis?’ Years later, I can now run Crysis on my laptop. Oh, how times have changed.

For those gamers out there who love to be immersed in a game’s visuals, (who doesn’t?!), ambient occlusion is a subtle, yet effective way of really making a level or scene come to life and seem more realistic.

In a game like ROME 2 Total War, the ambient occlusion plays a large role. You are controlling hundreds upon hundreds of warriors, marching, and battling their way across the ancient world. To really give them a realistic quality, ambient occlusion being toggled ‘on’ can really make it look like a blockbuster film, à la Gladiator or any other ancient war film. 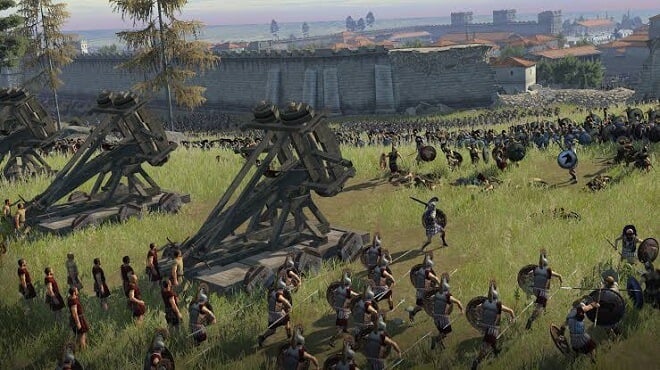 The shadows of their weapons, the glint of sun and steel, everything. It is the little things that can really send some graphical aspects over the edge and totally make you feel at home in a scene.

It isn’t always about the bigger picture. Subtle aspects of ambient occlusion, like making an office scene seem more real, rather than a flat portrait, is a great way to make it seem real. Desks, chairs, and computers all have ambient shadows, making you believe that this could be a reallocation. 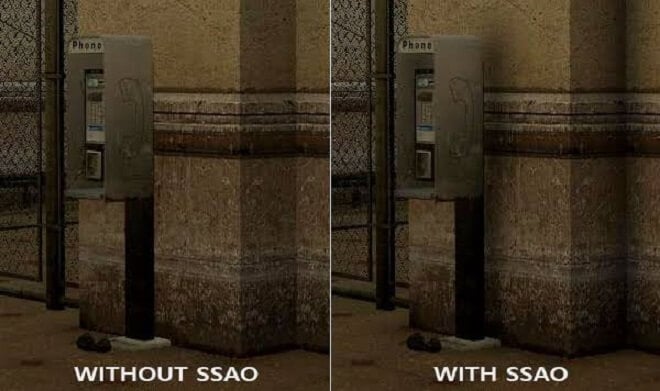 SSAO does not use any CPU to work, which provides the gamer with a solid amount of visual eye candy for 1/4th of the output.

Something that might appeal to game designers is that SSAO has no load times, making their game run smoother. If your game is simpler than Crysis, (and it probably is), SSAO is a totally viable and smoother counterpart to normal, full-fledged ambient occlusion.

Of course, the drawback of using SSAO is that you aren’t exactly getting the entire graphical power that you would normally get. It deals with what you can actively see at one time in the game; basically, giving you tunnel vision.

However, if you are willing to sacrifice punishingly high visuals so you can run a PC, or you do not really mind this concept of just seeing the graphical ability scene by scene rather than the full picture, then SSAO is probably your best bet.

We now know what SSAO stands for, but what is HBAO? HBAO stands for ‘horizon based ambient occlusion’. It is a step up graphically from the simpler screen space ambient occlusion. It ups the ante from every aspect in SSAO, giving the game better and higher definition, and visibility.

In comparison with HDAO and HBAO, they are nearly the same except for who distributes them both, namely AMD and Nvidia, respectively.

It renders in full resolution the different samples of normally darkened areas, adding an extra, subtle visual punch to your game.

At first, I thought that HBAO was simply a step up from SSAO. However, upon looking at screenshots of Battlefield 3, I noticed that HBAO really changes the look. Shadows appear subtly in places I did not even think to look before. Nooks and crannies, plants, corners—all of them were shadowed and made the game look grittier, darker, and most importantly, more realistic.

However, it will give you the absolute full experience. It isn’t that widespread yet, being used a few times in newer releases like Rise of the Tomb Raider. 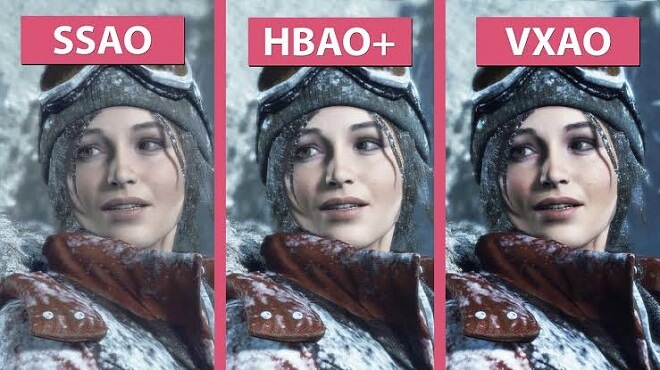 This is the form of ambient occlusion that will render objects that aren’t even in the scene you are experiencing. It looks truly breathtaking and reminds you how far we have come in gaming from the days of Pong and Pac Man.

The use of this highly advanced form of ambient occlusion, of course, depends on the type of game you are playing. Although some first-person shooters like the newer Wolfenstein games would no doubt look great with VXAO implemented, however, other games may be a better fit for it.

I am thinking about RPGs, action-adventure titles, (like the above-stated Rise of the Tomb Raider), would be better. The environments look like real places, the objects have a new life to them. The sky’s the limit with VXOA, and it is still in its infancy in the grand scheme of things. I am truly excited to see what it as to offer gaming as a whole.

Should You Use Ambient Occlusion?

Okay, so it comes down to this. After poring over the different methods, types, pros, and cons, I believe that you should definitely give ambient occlusion a shot. It can really add to a scene in a game, and there are enough different types and tweaked versions for you to best display a game without sacrificing your hardware that you are running it on.

However, if you do not emphasize that with your gaming, this is probably your best bet. In short: It works well, sacrificing graphical quality while still looking good on older PCs.

This is the ‘middle’ or intermediate option with ambient occlusion. It is a significant step up from SSAO, fleshing out the environment more and giving more value to a different object in the game. Although this is the middle option, it does push some PCs to their limit.

I would recommend this option for those who can run some higher graphical power on their PCs. You need to find a balance between computer performance and graphical output. This is the one where it might be a crapshoot if you aren’t sure about graphics.

A convenient way to get a feel for what your computer can run is by visiting ‘Can You Run It’. On this trusty site, you simply allow the site to monitor your system, acquiring all the pertinent info. You then use the drop-down menu to enter a game that you are interested in running. After clicking ‘can you run it’, it will tell you if you can run it, and if you can, how well.

It will list a bunch of helpful features like your CPU power in comparison to the minimum requirements and more. This has given me a good idea of how capable my PC was before purchasing games on Steam and hasn’t failed me yet!

This is the cream of the crop when it comes to ambient occlusion. It demands a lot of a gaming system but looks absolutely stunning.

If you can somehow find a way to run this version of ambient occlusion properly and quickly, this will no doubt give you the best graphical experience possible in gaming so far. Maybe in 10 years, we will be talking about VXAO the same way we talk about SSAO or HBAO.

But for now, this is the undisputed king of ambient occlusion. You will take a huge hit in graphical power, but the payoff could be revolutionary.

The pros and cons really have more to do with the machine that it is or will be running on. It is up to you, however.

You may have a graphics card and updated PC where you can run ambient occlusion in all of its glory. Or you might be gaming on an older laptop and need to implement SSAO so you can smoothly run it without really sacrificing too much in terms of visuals.

Let’s run through it one more time.

What is ambient occlusion quality? The different qualities and aspects are SSAO, HBAO, HDAO, and VXAO. They each serve an important purpose visually and each has its own pros and cons, depending on who is looking to use them.

Don’t be too quick to commit to one, however, do your research and look around and determine what is important to you graphically. Me, I am a simple user of SSAO. I personally emphasize story and gameplay over visuals, but that is just my personal gaming opinion. What is yours?