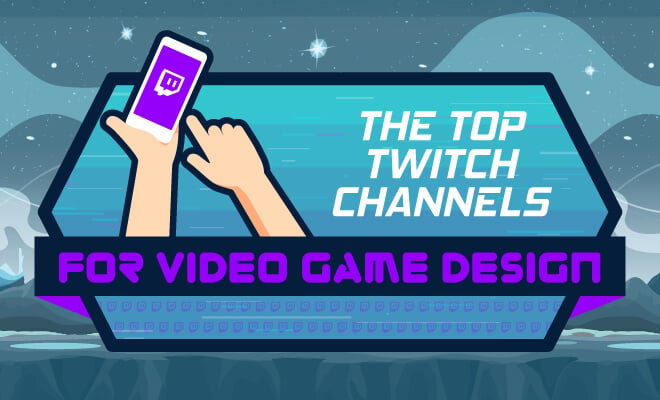 A great way to learn is to watch. You can pick up all kinds of new skills just from watching the free video tutorials spread wide across the internet. Youtube has some great options, but what happens if you get stuck? You might be able to find some help in the comments section under the video…

But if the tutorial is on the older side, commenters might not be active. There’s another way. It’s called live streaming. Enter: Twitch.

Twitch is a great way to watch game developers live-stream their process. Some Twitch broadcasters will stream their entire process–brainstorming, deliberation, mistake-making, everything. Other streamers will have a more curated channel, meaning they’ll be more selective with what they broadcast.

Regardless of which style you prefer, one of the best parts about Twitch game development channels is that you can interact with the developers while they stream. You get insight into the minds of a Twitch game developer’s thought process. Talk about powerful learning tool.

As billionaire, Warren Buffett says “you only learn from mistakes, but they don’t have to be your mistakes.” Let’s take a look at five of the top Twitch channels for learning game development, based on elements like audience engagement, quality of development content, and entertainment level.

Lachhh is a pretty funny guy. Before you go running over to check out his Twitch channel we have to warn you: his content is for a mature audience. He’s not afraid to be fresh. If you’re on the younger side or you prefer cleaner language and PG jokes, keep scrolling. There’s plenty of that below!

Lachhh will keep you engaged, even if it’s just with his endearing accent. He has strong Twitch audience engagement, especially when it comes to game-related questions. He has a number of loyal fans in his chat, and they aren’t afraid to ask “why”. He’s worked on games like Zombidle.

One of his past episodes (if you aren’t familiar with Twitch, past broadcasts are archived and you can watch even when the streamer isn’t broadcasting live, you lose the participation element but it’s still valuable). He tried to demonstrate a new tool he coded. When he went to use the new tool… it didn’t work!

So you get to watch him puzzle through the issue and troubleshoot his new tool. He ended up fixing it, explaining his process mostly out loud.

How do you use Lachhh tools?

Lachhh himself explains all you need to know about using Lachhh Tools right here. Go to the Lach Tools website and press download here. It will download as a .air file, which you can unzip on any platform that has Adobe Air.

Rob the Swan is hard at work on a C++ Blocky World Game. The game is called Diorama. It’s a game with a vision for an expansively customizable experience. There are free modes available to play right now.

You can actually play the game in its current state, and then see how his streamed coding makes a difference in your gaming experience as he releases newer versions of the game.

P.S. He also includes the occasional cat cam. So…if you really like cats… Rob the Swan is probably your Twitch man.

Jesse Freeman is developing a game called Dragon Sweeper, which will eventually be submitted to the Amazon App Store. Jesse doesn’t waste a lot of time on shooting the breeze–he’s focused. His twitch channel is very game development-oriented. He speaks clearly about his actions and his motivations for those actions.

He lets you in on his process. If you haven’t got the time for time-wasting, give Jesse Freeman a shot!

Adam quit his job to develop a game he’d been stewing over for a while. His game is called Bot Land. The premise is that you control a team of bots by writing code for their actions in javascript (if you don’t know javascript you can drag and drop actions with Blockly instead of writing the code).

For 8 hours a day during the week, he live-streams his efforts towards developing the game. You see his entire process. He engages with the chat room a bit, as people offer him tips when he hits a snag, or to explain one of his coding decisions when someone asks.

He’s very pleasant, very bright, and easy to follow: “if i do X, I should have Y… Let’s see if that works. Ok, I do have Y, that’s good.” And off he goes to the next step.

Obviously, London Rook isn’t developing a game from the ground up, but the channel offers you some insight into modding, dungeon design, and level design for a AAA, massive open-world game. Before Skyrim, there was Oblivion, before Oblivion there was Morrowind.

What games can you stream on Twitch?

You can stream nearly any game! Aside from some prohibited titles, you can stream thousands of games, and they don’t even have to be all that popular.  Depending on your preference, you can go with the crowd and what’s popular at the moment, something like Fortnite or Call of Duty will suit you more.

The most popular game on Twitch to date is League of Legends, followed closely by Fortnite.

You can download giveaway extensions through web browsers like Google Chrome, allowing you to run sponsored giveaways easily from your web page.