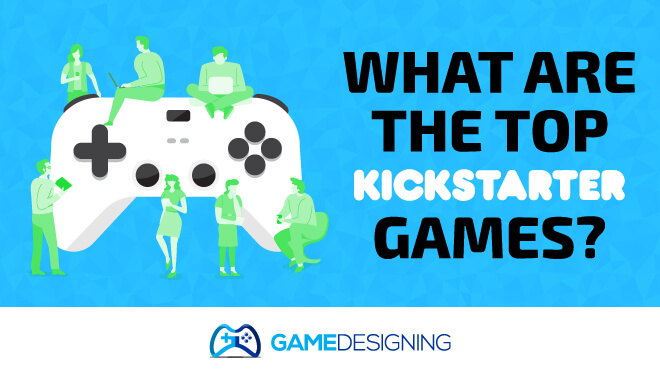 Kickstarter has been an awesome way to get personal passion projects off the ground. Where a team of developers maybe would not have had the funds or team members to fully complete a project, they can depend on the goodwill and donations of those who are willing to invest in their product.

This, in turn, allows users to feel like they are an integral part of the development process, often earning ‘perks’ and special features in the finished project if they donated a certain amount.

Kickstarter runs the gamut with projects, but a huge facet of Kickstarter is its pivotal role in game design. Many great games have been made possible by using the Kickstarter format, but which are the best, most famous games? You’re in luck; here are the 16 best Kickstarter games.

This was a PC game that was a long time coming. Okay, maybe not on the level of something like Half-Life 3, but still. The original Wasteland was a PC game released way back in 1988. Many consider this game to be the precursor to the beloved Fallout franchise, as it’s a post-apocalyptic role-playing game.

Oh, and you can really tell that Fallout developers took a lot of influence from Wasteland.

In the early 2000s, Brian Fargo, an original developer for the first Wasteland, bought the rights for the franchise and set out to make the sequel. The Kickstarter drive for Wasteland 2 started in March of 2012. The project quickly surpassed expectations, with it achieving its hefty $1,000,000 goal in less than two days and earning a total of $2,933,252. It was eventually released on consoles and iOS as well.

Afterward, Fargo and his team partnered up with Obsidian, and the game was released in September 2014 for PC after a few delays. Not only is it an impressive feat in crowdfunding, but it is also an awesome game. True to form, these developers know exactly how to capture that sweet post-apocalyptic vision of North America, filled with dark humor, turn-based isometric action, and over the top gore and visuals.


Broken Age is the return to point-and-click PC adventures for Double Fine Productions, helmed by developer Tim Schafer. Known for their quirky humor in games, Schafer and Double Fine are responsible for some PC fan favorites like Grim Fandango, Full Throttle, Psychonauts, and Brütal Legend.

At the time of its crowdfunding, its goal was an initial $400,000, but quickly received that and more, totaling well over $3 million dollars. Broken Age was one of the first significant crowdfunding game projects at the time and signaled a great new way for not only games to be made, but for fans and developers to interact on a deeper level.

After the initial PC release, it has subsequently been brought out for consoles, iOS, and the Nintendo Switch.


This one insane board game. True to the name, the game is dealing with exploding kittens. It is a super simple game that you can play with just a few friends and moves super-fast. More importantly, it was one of the most-backed board games ever to have graced Kickstarter.

The developers asked for a pretty reasonable $10,000 as their initial goal. What they didn’t expect, however, was to reach their goal in 8 minutes. That’s 8 minutes after going live. Sometimes I have to repeat it to myself to make sure I got it right.

With over 200,000 backers, the game developers received a whopping $8,782,571 at the beginning of its development. The game was quickly developed and shipped en masse to backers, eventually being released to the general public by September 2015. Since then it has developed expansion packs and remained very popular.

4. Dark Souls: The Board Game


I couldn’t believe that someone would be so sadistic as to take the difficulty of Dark Souls and transplant it into board game form, but they did. Dark Souls: The Board Game is the brainchild of Steamforged Games Ltd. It received the backing of £3,771,474 with 31,178 different backers. The game is shipped to players with a collection of pre-assembled miniatures of well-known Dark Souls monsters and characters.

The tabletop game allows you to face off against grotesque monsters that the Souls series is known for, and with the same intense split-second strategic decisions.


I am really into this one. It is touted as a story-driven RPG board game and features a dark fantasy setting, complete with monsters and settlement building. The gameplay takes place over three different phases and will ultimately take a whopping 60 hours to fully complete. This definitely isn’t a game for casual players!

Kingdom Death is officially the highest backed board game on Kickstarter. It received $12,393,139 from 19264 different backers.

So far, developer Adam Poots is hard at work delivering the goods for the backers, making sure that his RPG will be one of the best tabletop strategy games. Poots utilizes 3D printers for his miniatures and charges $400 for the game. He keeps releasing updates and expansion packs for the game, so it really never dies, unlike you: this is an extremely brutal game akin to Dark Souls.


Shogun Total War fans will be extremely happy with this next entry. Rising Sun is a board game for 3-5 people dealing with diplomacy in feudal Japan. By using strategy, you have to come out on top and earn the favors of the gods. Okay, so it’s not exactly realistic, but that’s what board games are for! It’s a very stylish strategy game where smarts are emphasized.

The game is simply played in a few phases in which the players prepare for combat with one another, culminating in intense showdowns with your friends over a beautifully stylized map of Japan populated with awesome miniatures. It had received $4,228,060 from 31262 different backers.


FTL is the extremely addictive space-combat simulator from Subset Games. In each gaming session, you are tasked with escaping from an alien horde in your lone ship. Staffed by a crew with different skills, you just have to make it out alive. FTL stands for faster than light travel, something you’ll be engaging in quite a bit if you plan to survive.

The stakes are super high in any FTL session, and you definitely lose more than you win, but it’s a learning experience. FTL received $200,542 with an original goal of a measly $10,000. It was released in 2012 and has remained a fan favorite for many PC gamers since.


This mystical adventure game has you taking control of travelers in a medieval world under attack from looming stone monsters. You’re tasked with getting your party to safety, having players experience a rich and beautiful story along the way.

Developed by Stoic, the Banner Saga is a truly visually stunning game: it has amazing drawn visuals that remind me of older animated movies in the best way. The music and the turn-based combat are all on point. It received $723,886 and was released in January 2014 on PC.


Possibly my absolute favorite of the bunch is the dungeon crawling gem Darkest Dungeon. In it, your hand-picked team of ruffians, each different class, needs to traverse the unspeakable depths of dungeons, trying to hold onto your sanity and your life. The art style is beautiful, and the gameplay is punishingly addictive and fun. It has an H.P. Lovecraftian vibe to it, and its online community is great.

It was thought up by Red Hook Games in 2014, and reached their goal and more, receiving $313,337. It was released in January 2016 and has subsequently been released on iOS, consoles, and more.


This one is a great RPG from Larian Studios that really brings gamers back to PC gaming’s strong suit—role-playing games. In this creative little game, You take on the roles of two-player characters as you make your way through a magical, rich world filled with epic fantasy and dark humor.

Something that sets it apart from many computer role-playing games is the complex gameplay. It emphasizes puzzle-like gameplay and extreme strategy. It received nearly $1,000,000 and was released for PC in summer 2014.


In 2015, Pillars of Eternity was released for PC and RPG gamers rejoiced. True to form, Obsidian and Paradox Interactive brought an awesome, deep game to PC gamers that missed the days of Baldur’s Gate and Icewind Dale. Not only was it a great RPG, but the combat is super satisfying and even has great voice acting and writing. The development team raised an impressive $3,986,929 for the then titled ‘Project Eternity’. This popularity eventually led to the ambitious sequel, Pillars of Eternity II: Deadfire.


Another fan favorite, this spiritual sequel to the immensely popular 90s PC game Torment, raised an insane $4,188,927 from loyal fans. It met its goal within 6 hours of its launch. It was developed by inXile Entertainment, Inc., the same team behind Wasteland 2.


This one might be a little controversial, but I feel like I have to include it. It hasn’t been released yet, but this sci-fi action game in development by Chris Roberts and Cloud Imperium Games. Roberts has been criticized for pushing back deadlines and not delivering on the ambitious promises. Can Chris Roberts dig himself out of the hole? I really hope he can.

Right now, he and his team have amassed the largest donation ever from Kickstarter: $185,934,923+. That’s a plus at the end of it! People are still donating. The footage that exists is impressive, but I want the spiritual successor to Wing Commander already!


I know, I know, another unreleased project. But I love the Shenmue series too much for me not to include it on the list. Shenmue III is an action-adventure game currently in development. It follows the trials and tribulations of our hero, Ryo Hazuki, and his quest for revenge. I was a huge fan of the first two, which were released back in the early 2000s, so it has been a long time coming.

The unique gameplay makes you feel like the part of a living, breathing city, interacting with unique characters. The Kickstarter went live and asked for $2 million, with the team receiving an easy $6,333,296. The team wants to release it for both PC and PS4.


Everyone I know loves Undertale. Out of all of the games I get recommended when I ask, Undertale is always mentioned. It’s a unique RPG game that really turns gaming conventions on their heads. You can go the whole game without fighting a single enemy. Instead, you can befriend them if you wish. You even get an achievement if you choose this path. How creative is that?

The design is reminiscent of early video games in its simple yet cute art style. It was developed by indie developer Toby Fox, who originally asked for a mere $5,000 to cover costs, eventually getting $51,124. It was released on all consoles, PC, and iOS and Linux in 2015, much to everyone’s glee.


I know, I already mentioned the sequel to Pillars of Eternity, but it’s so good! Not only that, but its Kickstarter goal eclipsed that of its predecessor receiving $4,705,524 without trouble.

In this sequel, you continue your quest from the first game with your faithful companions in tow. You’re then in charge of your own ship on the open seas of the ruthless Deadfire archipelago. Will you be a merchant? How about a pirate? Or maybe a crusading pirate hunter. The choice is yours in Pillars II.

At this point, I’m excited to see if Obsidian and Paradox can top themselves with the inevitable third entry!

Kickstarter has been the lifeblood for great games: whether they be on PC, consoles, mobile, or even our tabletops. Today has got to be the golden age of gaming, allowing us to communicate and support our favorite up and coming developers who have beautiful and artistic visions.