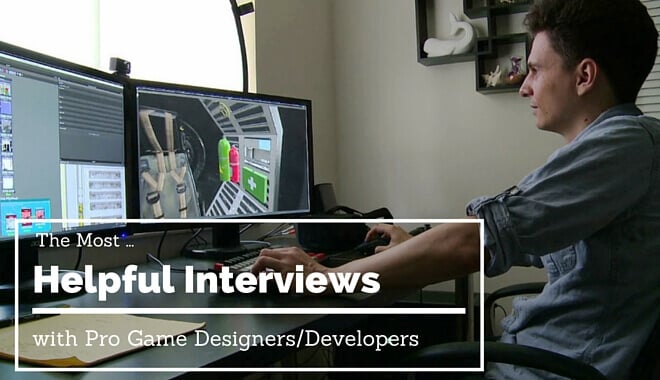 Gaming’s popularity is ever on the rise, with no sign of it stopping anytime soon. When an industry is generating billions of dollars annually, it always follows that people will try and capitalize on the market.

In a world where technology is at everyone’s fingertips, and the paths to exposure are more accessible than ever, the market is flooded with ideas, games, and creators.

A good way to improve your odds is to look at what the professionals have done before you, in a similar situation.

Industry professionals hold interviews and attend conferences and expos. These aren’t just opportunities for them to share their games, but also to share their best practices and latest findings.

What’s even better is that, even if you can’t attend a conference in person, you can watch a lot of these summits, panel discussions, and interviews with designers and developers online.

We’ve taken the liberty of compiling a list of 10 helpful interviews you can find right on YouTube.

The Realities of Life in Game Development

This first video is less of an interview and more of a panel discussion. Panel discussions just mean more industry professionals with more advice to give you! It’s like a 4 for 1 deal.

This particular panel is full of Full Sail graduates. They discuss some great things, like the process of learning.

Kerry Allen, a software engineer at EA Tiburon, talks about how little of a difference there is between being a student and being a professional in terms of learning.

Learning just never stops! The setting changes, and the pay, but there’s always more to learn.

There’s also some great information from the panelists about the mutating roles at a game studio. You might find yourself shifting your position to fill a void, rather than staying specifically relegated to a concrete job.

Game Design Theory I Wish I Had Known When I Started

This is more of a presentation than an interview, but Dan Cook has some valuable game design advice. Dan is the founder of Spry Fox, and he’s a veteran game designer.

He’s spent thousands of hours designing hundreds of prototypes, and has a handful of great games to show for it: Road Not Taken, Alphabear, and Realm of the Mad God to name a few of the more recent ones.

He discusses the tools and practices he uses when designing games, and how failure is OK. As the title suggests, he talks about the things he wishes he had known when he was starting out!!

This interview is with Edmund McMillen, he is the artist and game designer for Team Meat. Team Meat brought the highly popular Super Meat Boy to the world.

He says some cool things in this interview: “Steal from me. I want you to play my game. If you really like it, buy my next game.”

He talks about not being in it for the money, why it’s worth it to question old video game tropes, and digs into some other game design topics.

We see our friend Daniel Cook again (founder of Spry fox, remember?) with this talk. He talks about what goes into designing very original games.

What team size works best? Who should be on the team? How do you avoid making shallow games? What are pitfalls to avoid? He provides his answers to these questions in more in his talk.

Another panel! You just gotta love the value of panels. This group discusses game psychology. The talk is called Your Brain on Games: The Hidden Psychology of Gaming, and that’s exactly what they cover.

They explore how “making a difference” can be a compelling, rewarding in-game experience (as opposed to things like in-game currency accumulation).

They also expand on the “four keys to fun,” which deals with different kinds of levels of fun and how best to implement them. Panelists include speakers from Zynga, XEODesign, and Ayogo.

This talk from Mark Acero (senior combat designer on the Prototype 2 team) talks all about combat design. He has over 12 years of experience, in which he’s shipped 13 games through seven different studios and Clone Armies Level 19, The AMBUSH

He talks about the value this kind of varied experience brings. He’s worked with a bunch of different design philosophies and technologies through his time at different studios, and he speaks to how that contextual experience makes him more potent than ever.

This interview with Mossmouth, also known as Derek Yu, talks about all things game development.

He is the creator of the indie hit Spelunky, and by listening to him talk about the indie game community and game development in general, viewers can pick up some great insights.

Mossmouth talks about everything from a standard day in his life (replete with waking up around 2 pm) to the tools and software he uses to make a game.

This is a cool interview with lead game designer Steven Masters. He talks about the design of Assassin’s Creed III, and how the new main character actually informed a large part of the game design.

Because of the character’s wilderness-driven origins, the level designs took a departure from the normal cityscapes. Then the new natural environment required changes to the stealth system. It’s interesting to see the new character’s backward-reaching effect on the game design.

Day in the Life Video

That’s what this quick interview/day in the life video is all about! Level designer Kim talks about bonding with her boss, designing levels, and her education.

For a sneak-peek into a game design interview, check out this video! It’s a quick 20-minute mock interview between a hiring executive and a sound designer.

The hiring executive is actually the vice president of product development at Turbine, Craig Alexander.

It offers an enlightening glance into what an interview could potentially entail. In such a competitive market, preparing wisely for job interviews could help give you the real leg-up that you need.

A quick YouTube search will show you that these twelve videos barely scratch the surface of the wealth of game design and game development content out there.

Search for specific topics and be pleasantly surprised by the number of results your search returns. YouTube and the internet are beautiful things for helping you learn on your game developing journey!