You are here: Home / Gaming / 7 Trends Redefining Game Design: How Technology Is Changing the Gaming Industry 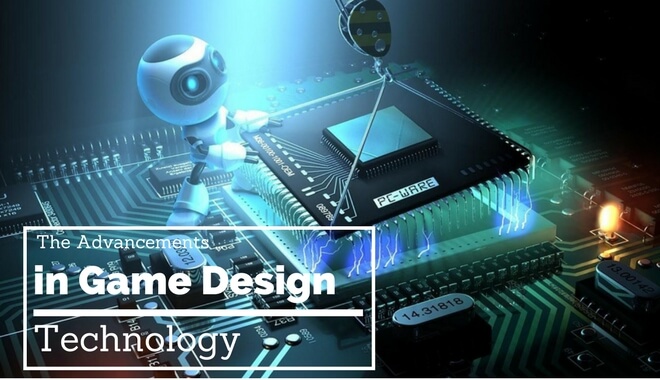 Have you heard any of those theories about how the world we live in isn’t actually “base reality?” Basically, what we think of as “real life” is just a hyper-realistic simulation that the more advanced version of us built, and we live in it?

It’s kind of crazy, but when Elon Musk says it’s most likely the case, then you kinda’ gotta’ give it some serious thought (Dibs on being the chosen one–see you at the Zion rave).

The more you think about it, the more it’s kind of like…well, wait a minute…what if we are?
As the video above mentions, forty years ago we had Pong. Now we have photorealistic games and virtual reality.

That’s an enormous technological jump in a very small period of time. Calculators used to be the size of rooms…now you can fit one in your pocket…and that same device can access the internet. Play music. Play videos. Store data.

Make telephone calls. Send emails. Navigate you across the globe. Wake you up in the morning. Take hi-def pictures.

And all of that has happened in the past 20 years. But now, new phones are released every year with better tech than its predecessor. Faster processing power. More storage. The tech advancements and growth is crazy.

The graphical difference between Nintendo 64 in the mid 90s and a high-end PC today, just over 20 years later….insanity.

It’s an insane difference in a short period of time… Yeah, we might just be in a simulation.

Anyway, let’s talk about what advancements have been made in game design technology, and what they mean for you (because the white rabbit is going to show up any minute now).

The Constant Advancement of Technology Itself

New iterations of gaming consoles come out more often than they used to. Microsoft and Sony both released 2.0 versions of their current generation systems. Xbox One evolved into the Xbox One S. The PS4 evolved into the PS4 Pro.

What does this mean for you and the industry? It might mean constantly pushing the boundaries. By the time a game goes live, it’ll be time to start thinking about the next iteration of gaming technology.

It might also mean a lot of porting and backward compatibility opportunities.

We saw augmented reality in action with Pokemon Go.

Now, that game was really fun for a short period of time. How long is it before people think of augmented reality uses for more than just Pokemon Go spinoffs?

What does this mean? You’ll have some serious wiggle room for thinking outside of the box. Imagine the puzzle or strategy games that could be played in augmented reality. Is real-life Yugioh a thing yet?

Here’s an even better idea: Think beyond existing franchises. What are some original IP ideas that would rock in the augmented reality format?

The older sibling of augmented reality– the virtual reality is full-blown immersion gaming.

The world has seen attempts at the virtual reality before. It didn’t catch on. This time around, virtual reality looks like it’s here to stay. And it’s not just being used for entertainment!

Science and Medicine fields are experimenting with VR as a way to teach paraplegics how to walk again. That’s insane.

What does this mean? Right now VR is limited by a time cap (play too long and the nausea sets in). Another issue is spatial limitations. How do you explore the world without the help of a handheld controller and without bumping into everything in your physical space?

That’s just one of the questions you’ll have to answer as virtual reality moves forward. Virtual Reality can take users anywhere, let them do anything, and we’re only scratching the surface of those possibilities.

On paper, this sounded like a neat feature that some games tried to implement (*cough* Tom Clancy *cough*). Aside from potentially making things easier, there’s potential for really neat integration into games.

For now it just kinda seems like you’re talking to yourself or yelling at the screen (which your roommates might be used to by now, anyway). As games get smarter and AI technology keeps getting better, will we be able to have actual conversations with characters in the games we’re playing?

We almost don’t need to say anything else, but… Motion control is cool, and certainly not something that was done well (if at all) before the Wii’s release.

How can motion control tie in to augmented reality or virtual reality?

Another Nintendo hallmark. The Nintendo Switch is pretty dang portable and pretty awesome. The fact that you can move around from connected screen to handheld screen so seamlessly is pretty remarkable in the world of gaming tech.

Both the portability and local multiplayer support are refreshing departures from the online-only, play solo gaming trend that video games have been mired in the past few years.

If you’re out there listening…please bring back the lost art of local play in video games. As we mentioned, the Nintendo Switch did this really well.

We miss the days of split-screen Halo and bringing a guest into an online game of Call of Duty. As fun as it is to return to the Xbox 360 and PS3 generations of consoles, there are some games coming out now that would be a blast to play locally with friends.

Graphics and the Screen Power

TVs are pretty insane now. The 4K HDR picture is wild. And the graphics are keeping up with this power. It’s almost jarring to fire up an old game and see how rough around the visual edges it was.

What does this mean? Life in a simulation, here we come…

Perhaps the only games more portable than the Nintendo Switch, Mobile games are responsible for nearly half of the video game industry sales last year.

Playing games anywhere, connecting with friends on the internet. Playing everything from Words with Friends to Runescape whenever you have some downtime during your day.

Try and Keep Up

With the pace technology is keeping these days, this article will be mostly out of date by the time we can publish it. It is an amazing time for tech, and we really don’t know what the future holds.

When the television was invented 90 years ago, showing its first broadcasted image in black and white, no one would have predicted where it would go.

We are in the same boat now, except in just 10 years we’ll look back and be amazed at how far we’ve managed to come. Try and keep up!