Home » Experts » Surviving Freelance Game Development: The Ins and Outs of Finding Work As A Freelancer 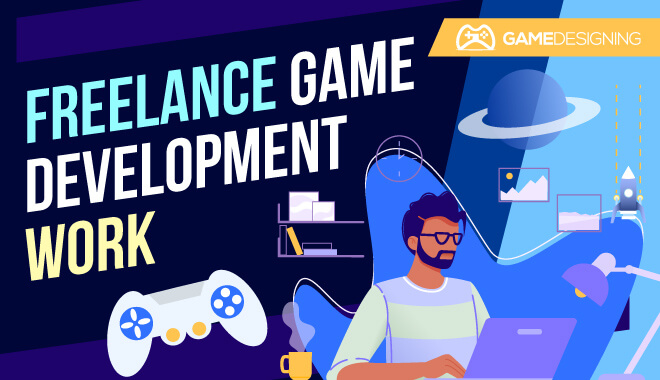 “As a freelance game developer, I have a flexible schedule and the freedom to choose what project to work on,” Guillaume Letaeron, a French expat living in Japan, said. He is one of the growing numbers of foreign game developers settling in the land of the rising sun, searching for opportunities to work with video game company giants or start an indie game studio.

The toxic working environment prevalent in video game studios has some game developers take the huge leap from employee to freelancer. But it’s not just that.

As creatives and tech experts, they want to have control over the projects that they get to create. They want to explore and work on other video game genres. “You are going to be spending much of your time developing the same type of video games repeatedly,” Guillaume said, sharing his experience from working in mobile games and in Japanese companies.

But freelance work comes with risks. For one thing, you lose your job security. “It’s tough when you don’t have regular clients and long-term projects,” admits Guillaume.

And unless you have a portfolio that clearly demonstrates your expertise in the field and a reference from one of the heavyweights in the gaming industry, looking for projects can be hard. You need to prepare yourself for the lean times. In the interim, freelancers resort to contract works, bidding against newbies and some other cheap competitions to earn money.

In this article, we explore the ins-and-outs of being a freelance game developer, as Guillaume talks candidly about his experience.

From Audio Engineer to Game Developer

Guillaume is from the era of Computer Games: Amstrad CPC, Atari ST, Amiga 500; and consoles like the N64, Playstation 1, Sega Saturn. He dabbled in BASIC (Beginners’ All-purpose Symbolic Instruction Code) when he had his first computer, a Canon MSX 1.

Professionally, he entered the gaming industry as an audio engineer: “I wanted to become a music composer for video games. I was using a framework called Darkbasic and did some programming with it.”

He worked on 3D low poly modeling for games before becoming a full-time programmer.

He tinkered with map tools, experimented with game engines, and taught himself how to create video games. For his first serious project, he used the XNA framework and the Shiva engine before moving on to Unity. And he never looked back.

It’s hard to establish a routine when you’re working irregular hours, taking on short-term projects. But when he’s working on projects, Guillaume starts his mornings by checking his emails and project management tool for client feedback. He organizes his day around his project tasks.

He used to work for a company making casual games, JRPG, and battle RPG on a 9 to 12 month development time.

As a freelancer, he has worked on various video game genres from a few weeks to a couple of months.

His work involves implementing core gameplay and UI. “We used Unity engine to develop those games, so that was mainly the tool I used to work on my part.”

Add Logic Audio, Blender 3D, and Photoshop to his list of tools. He relies on Trello for project management and to stay organized. Github or Bitbucket to store and manage his digital assets.

“I wish I had been more serious in my math class. My advice for newbies would be: don’t neglect your math class,” Guillaume regretfully admits.

Math is the foundation of game design. We wrote an article about the importance of Math, which you can read it here. The branches of Math that programmers use in game development are the following:

It looks daunting, I know. And yes, there are game engines that let you drag and drop the elements of your design. But if you want to be indispensable in an already saturated job market, you need to stand out by having the technical skills video game company giants are seeking.

Second, self-learning is a must-have skill if you want to stay relevant. There’s no way for you to know everything. Thanks to the internet, you now have limitless information at your disposal. Use it well.

KISS and Don’t Fall In Love…

…with your prototype. You are not making the final product. In this line of work, a failure is an option. It’s easier for you to let go and move on when things don’t work out.

KISS stands for ‘Keep It Simple Stupid’, a term coined by Kelly Johnson, the lead engineer at Lockheed Skunk Works. This principle is still very relevant today and is widely used by software engineers. The challenge is on the designers to design a product with the end-users in mind. Thus, simple.

In video game development, apply the KISS principle when you’re building a prototype. “It’s something to keep in mind. Things may radically change based on feedback and other factors.”

“I believe that mobile platforms are going to stay strong,” Guillaume said with a hint of uncertainty when asked about the future of gaming. “The only thing I can say without being wrong is that whatever happens, developers will have to continue to adapt over time to stay in the loop.”

If you want to connect with Guillaume, visit his website here.