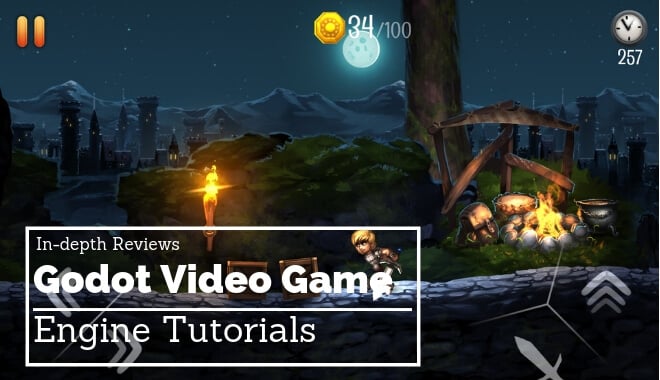 Game engines are the framework around which game developers build the actual game around. Of course, they all have their own unique build. For example, Grand Theft Auto V’s game engine, RAGE, is very different from the widely-used Unreal engine.

This gives a game its own particular look and feel. Some of your favorite games are sometimes recognizable due to their engine. The above example, Grand Theft Auto, has insanely fun physics that wouldn’t be as memorable if Rockstar used a different setup.

Unreal and RAGE are great video game engines, but what about smaller ones; engines geared toward smaller game development companies? Let me introduce you to the Godot game engine.

Godot was developed in 2007 by two individuals, Juan ‘reduz’ Linietsky and Ariel ‘punto’ Manzur. One of their aims with Godot was to keep the project expanding, building increased features. Since 2014, Godot has been receiving periodical updates, and is currently on version 3.0, released in January 2018.

Licensed from the Massachusetts Institute of Technology, Godot is a free to use, open source, game engine. I was immediately drawn in to their basic premise and mission:

“Godot provides a huge set of common tools, so you can just focus on making your game without reinventing the wheel. Godot is completely free and open-source under the very permissive MIT license. No strings attached, no royalties, nothing. Your game is yours, down to the last line of engine code.”

Godot promises unique nodes and extreme custom-built assets for someone designing their own game from the ground up. It promises:

“Friendly content creation pipeline for artists, level designers, animators and everything in between.”

This truly is a golden age for game development from the solo coder developing the next Stardew Valley, to a more advanced gaming studio. Not only that, but the platform diversity is truly impressive.

The sheer accessibility is a huge plus, especially if you were looking to release your product on Steam; players on every computer can access your product.

The good news for starving artists: Godot is free. It allows for download in:

On the downloads page, Godot offers unparalleled support. You have immediate access to not only the huge list of developers, but also the two developers. On top of that, the community is very active and supportive.

Good news for old users of Godot as well: they also give people access to former builds of the engine if you were more comfortable with the program before their 2018 update.

Waiting for Godot…to teach you how to make better games

This is all great, but how do you go about using Godot, and even more, how to use it well. We all want you to be able to bang out great games by utilizing every aspect of Godot, letting no part go to waste to make the best game you can make. Here are some pointers and tutorials to help you through it.

Godot themselves offer an in-depth tutorial for their engine, starting at the very first steps of design, becoming familiar with the interface. Along with these main tenets of Godot’s design, there are subheadings that help you get down to the nitty gritty of video game development. It’s honestly breathtaking. Here’s some of what it offers in the ‘Getting Started’ section alone:

“Every game engine is different and fits different needs. Not only do they offer a range of features, the design of each engine is unique. This leads to different workflows and different ways to form your games’ structures. This all stems from their respective design philosophies.

This page is here to help you understand how Godot works, starting with some of its core pillars. It is not a list of available features, nor is it an engine comparison. To know if any engine can be a good fit for your project, you need to try it out for yourself and understand its design and limitations.”

They place a lot of significance on the impact of their community. They pride themselves on being community-driven and have a great forum in which you can interact with other Godot users for general discussion and technical help on your next project.

They tout over 500 contributors working on Godot, along with some full-time employees. It’s a labor of love, and has a great grassroots feel to it. Via the community, they also offer a few video tutorials to help.

This is why I believe that Godot’s own website is most likely the premier source of support and guidance in regard to learning Godot properly: right from the horse’s mouth.

One of the tutorials that Godot offers developers is a channel called GDquest, run by a French gentleman named Nathan.

That’s a perfect summation of GDquest’s goal. GDquest, specifically, has an unbelievable amount of video tutorials for Godot developers. They have nearly 20 videos on RPG turn-based combat, and 77 videos in the playlist ‘Godot 3 tutorials.’

In the RPG tutorial, I couldn’t stop watching, as I watched the basics of creating a turn-based RPG develop in real time. I recommend watching these well-made videos even if you’re not using Godot.

I found myself going down the YouTube rabbit hole with this one. Not only are they easily accessible videos, even for non-developers, but they involve beautiful artwork and creative designs in which someone could just watch normally. That’s something special.

Definitely check out GDquest. Here’s Nathan’s twitter account if you need to get in touch with him.

I really like this option. With most totaling in at 15 minutes per video, KidsCanCode show you everything in Godot. Not only that, but they put an emphasis on teaching younger coders on game development, something I particularly find admirable. I watched an in-depth video on making a Top-Down Tank Battle, and I loved it.

I think we all need more channels like this, which provide easy to use and interesting tutorials in which young, aspiring game developers can perhaps learn more hands-on techniques than they would in a class or in school.

I know when I wanted to develop games, I was only able to attend a game design camp that was lacking in what I really wanted to do. Nowadays, kids and adults can access great tutorials with a few clicks or tap of the fingers, something which I’m extremely grateful for.

Along with in-depth reviews and tutorials on different video game engines, Gamesfromscratch also offers an exclusive tutorial series on the 3.0 build of Godot. Narrated by a likable and positive host, the channel explores the ins and outs of the Godot engine.

I watched enraptured as this video displayed the basics of the newer build and saw as an RPG-like environment was built before my very eyes. Along with Godot videos, Gamesfromscratch offers interesting miscellaneous videos dealing with gaming engines and gaming in general.

My personal favorite is Materialize — An AMAZING Free Texture Map Generating Tool. Their mission is as follows:

“We cover all things game development related, with a focus on tutorials. Game engines, art tools, programming languages, you name it, we will cover it. After doing text-based tutorials for several years we have started slowly making more video content.”

HeartBeast is another useful YouTube channel dealing in game engines and gaming in general.

“Hi! Welcome to my channel. My name is Benjamin and I make GameMaker Studio Tutorials, Godot Engine Tutorials, and pixel art tutorials. If you want to learn to make games, you are in the right place!”

Benjamin offers great info for game developers. With over 12 million views, Benjamin has built a great little channel to help you with Godot tutorials, as well as other engines.

His handling of Godot is exceptional, starting with the very basics, and slowly going over every detail so you know exactly what you are getting into. His first video is 23 minutes long, and although this may scare away some impatient viewers, Benjamin puts in great care to show first-time users what to expect when planning their projects.

Definitely check out Benjamin if you haven’t already downloaded Godot, (which you should have!), to get a greater feel for the engine.

Accessibility: the effort it takes to start using Godot is to simply press the download button on their website.

Community: The Godot community is a great resource for your developer’s needs. A positive group of individuals awaits you to talk about games, code, and the engine. The sheer number of developers should make you feel right at home.

Versatility: I love the fact that you can code in 2D and 3D. The option for a robust cross-platform model is also a plus. This grants inclusion within the gaming community and should inspire developers to reach out to a larger audience.

Tutorials: The tutorials themselves are very in-depth. Having them as strength is such a positive aspect of Godot.

You need a good intro for complete newbies of Godot, and they offer that in spades. From their own insanely detailed website to the beautifully detailed YouTube channels dealing primarily with their game engine, Godot has the benefit of having an unshakeable base in which you can get started on your game.

More Options: In a poll of which is the best 2D game engine, Godot scored a staggering 3rd place, with Unity at 8th place. Unity at 8th?! It’s something I thought I’d never see, but there it is. People’s main pro was that every property in the engine can be animated. Not only can everything be modified but modified with relative ease as well.

YOUR work: The unique license allows you to keep your work and hold onto it. No DRM here: everything you create is YOURS.

3D support: Unfortunately, when it comes to 3D support, Godot requires the user to access outside party plugins, perhaps making it a bit more tedious and difficult to make your project more cohesive. The graphics pipeline is a little all over the place, so you could run into some licensing issues.

Amateurs beware: Some users have claimed that although Godot is a great engine, it’s learning curve could be a little rough for new users. You really need a firm grasp of the ins and outs of whatever it is you are trying to develop.

Yep, you’d be hard-pressed to find another pros and cons list with such minimal cons compared to the great pros. The consensus on the Internet is that Godot is the engine to use if you’re looking to make some seriously creative projects.

The advent of engines being made by a small team is a great movement in gaming. This allows more options, fewer constraints, (meaning more ambitious projects), and greater ownership of your work. We need more engines like Godot in the world, where a game developer can fully realize and execute an ambitious project that will delight gamers to no end

If you are not downloading Godot by now, what are you waiting for? Everything is all on the website. This is the engine to make your creative vision a reality.