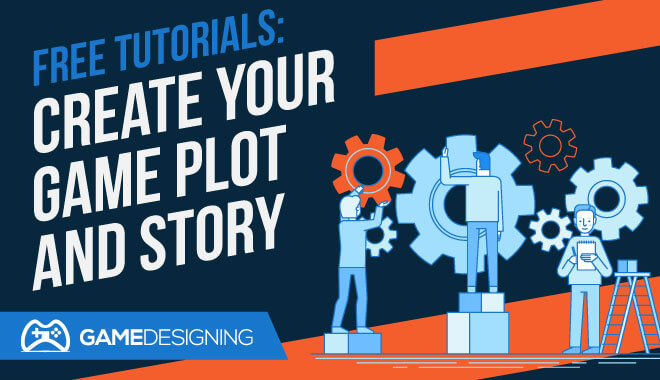 Plot is the kind of thing that can ruin your game. Or take it to the next level.

For a game like Angry birds, the plot is….eh, not really there. Birds fighting pigs, kamikaze-style? Ok… but we don’t really know why. And there isn’t much of a story.

There’s nothing telling us why we’re in the arctic on one level and in the desert on another. But the game doesn’t really need it. It’s the puzzle challenge that keeps people involved.

A game like Mass Effect needs a strong plot. The gameplay in the first Mass Effect was…subpar. But the story was engaging. The world was expansive. The plot was memorable.

The world’s greatest warrior is actually an evil mastermind controlled by an alien race that wants to exterminate biological life forms? And you, as the only human specter, have to convince the council and the universe at large that their champion is really the evil person you say he is?

It’s a way to separate yourself from similar games. It’s a way to take your game from mediocre to a powerful piece of interactive fiction. An immersive world of memorable, emotional experiences.

And this all stems from the plot.

There are tricks, tips, and techniques that the experts use to put great plotlines together (most of the time it isn’t an accident). This guide is a collection of resources you can use to come up with your own game-changing plots.

Darby McDevitt is an industry veteran and is the lead writer for Assassin’s Creed at Ubisoft Montreal. In this “Practical Guide to Game Writing,” he walks you through the stages of script-writing in a studio setting.

Even if you’re only looking to create plots and write scripts for games you want to produce on the side, it’s a worthwhile read. He has steps for the three stages of game development:

He mentions the importance of collaboration between writers and designers. Designers will occasionally have to alter the level design or the layout of a map in for one reason or another. The changes might seem small to the designers, but if you’re the writer you need to know about it.

McDevitt goes on to make a joke about how a Wayfarer must make his way to the Black Forest to find a crystal dagger–only to have a “producer person” interrupt him and say they scrapped the Black Forest and replaced it with a Walmart.

So, whether you’re working in a team or on your own, make sure your script and overall plot makes sense with any design changes you make.

The Tornado Twins are a couple of fun boys that make Youtube videos dealing with games. In this particular video, titled Tutorial: How to Write Story for Games, one of the twins walks you through a couple of important elements that every story should have.

He talks about character motivations for both the good guys and the bad guys. One interesting point he makes is this idea of giving the protagonist and the antagonist goals that are in line with each other. He references Half-Life and the motivations of the marines–they want to clear out Black Mesa and kill all the evil there.

Your character wants to do the same thing–kill the aliens. The marines think you’re part of the evil, but really you both have nearly the same goal.

This kind of misunderstanding or “same end, different means” makes for a compelling story. In addition, it should provide ample situations for the two characters to clash over and over throughout the game.

Building a Paper Prototype for Your Narrative Design

This YouTube video comes from the 2014 GDC and it features Jamie Antonisse who worked at Disney at the time. Now he works at Sirvo Studios, a company he cofounded at the beginning of 2016.

In the video, Antonisse describes how you can test your narrative design by building a paper prototype. In essence, he tells you how to make a board game out of your video game plot.

He describes both the “how” and the “why” behind the exercise in this 30 minute video. The “how” focuses on how to take your ideas for a video game plot and actually build a board game out of it. He talks about what content to include (such as important choices that the character will make, and where each of her decisions would lead).

And also how to build the game itself (like using “simple, familiar materials” such as poker chips, coins, or other board game pieces).

To be clear, you’re making a board game prototype. Not a board game that you intend to pitch to Walmart. You only do this to test your narrative before you start coding the video game version–and that brings us to our “why.”

You can see if players will enjoy the narrative in your video game by testing the same narrative on players in board game form. Antonisse goes into the process in more detail, so we’ll let him take it from here.

There is another way to learn how to write game plots, and it involves playing all kinds of games–yes, even the ones you wouldn’t normally play.

Play through games and really pay attention to what’s happening with the story. If you like what happens in the story, think about why. The same goes for stories that you don’t like–what about them doesn’t work, in your opinion?

Is it the sequence of events? Is it something about the characters? Their motivations, or their dialogue, or their particular behaviors?

In both good and bad cases, think about why the dev team did it the way they did. If you didn’t like something, how would you have done it differently? What would you do to improve it?

There’s a lot of power in unpacking what others before you have done. It is, whether you know it or not, how most creative work comes to fruition. We don’t say that to devalue the work you’ve produced so far and the work you’ll go on to produce–not at all.

We’re using it as a way to persuade you of one more tool in your belt: inspiration from others.

It was Mark Twain who said “There is no such thing as a new idea. It is impossible. We simply take a lot of old ideas and put them into a sort of mental kaleidoscope. We give them a turn and they make new and curious combinations. We keep on turning and making new combinations indefinitely, but they are the same old pieces of colored glass that have been in use through all the ages.”