You are here: Home / Gaming / How to Start Playing iMessage Games 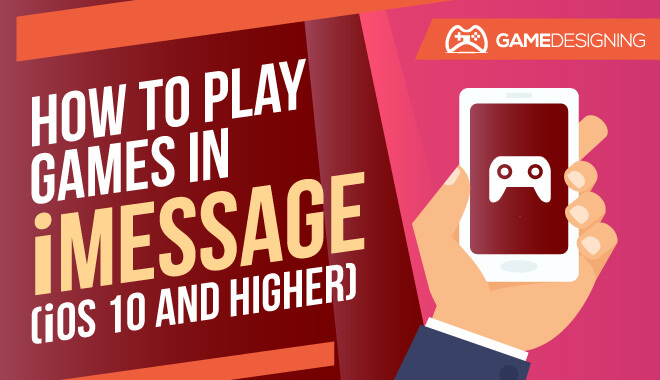 When Steve Jobs unveiled the original iPhone way back in 2007, we all probably didn’t imagine that Apple’s stab at a cell phone would rarely be used as a traditional telephone.

Sure, we knew there would be fantastic tech advances. However, it seems like Apple’s foray into the cellular market was a technological milestone. Kind of like the first computer or first use of the Internet.

While you can make phone calls with an iPhone, the beauty and creativity lie with its apps, games, and access to wireless Internet. Sending texts ties in perfectly with some of Apple’s best features. That includes iMessage games.

Can You Play Games on iMessage?

Today, things like the iPad and iPhone are more popular than ever, always adding something to their app stores. Of course, there are quite a few games on the iPhone, but there are also some on iMessage in particular.

That’s right. You can play games right on iMessage. How do you do this? Let’s break it down.

How to Get iMessage Games

How to Play iMessage Games

After installing one of the many message games, go ahead and go to one of your text messages. When you access the bar at the bottom, you can choose the game you downloaded.

Once you click on it, you can play along with the person you are texting, right in iMessage.

You can also play iMessage games solo if you want to. If you want to delete an iMessage game, simply hold down the game’s icon and wait until the floating ‘x’ appears. Tap ‘x’, and the process is complete.

There are a ton of games in the app store for use in the iMessage space in particular. Let’s see which are the most noteworthy and which message games (iOS) you should download ASAP.

(iOS) iMessage Games You Should Play

We are going to list some of the best games to pick up in the app store. Afterward, stick around for our ‘best of the best,’ where we will award specific iOS 10 games based on what they do best. You know, kind of like an award show.

Game Pigeon isn’t just one game. Instead, it is a pretty considerable collection of classic game experiences rolled into one. Why download Game Pigeon?

There are a few in-app purchases and some pesky ads. However, it’s a great diversion you can enjoy with a few friends. 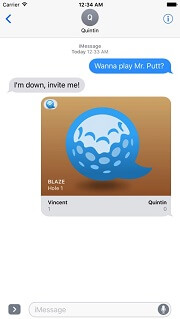 In Mr. Putt, you need to make your way through different trippy levels, getting the ball in the hole at the end. Pretty self-explanatory, but satisfying nonetheless.

This is an entertaining and straightforward game to play with some friends. The object of the game is to tell two truths about yourself, peppering in one lie as well to throw people off. It succeeds as an ice-breaker game in office and school settings, as it introduces people to one another, and is a lot of fun.

You record yourself telling your two truths and lie, and the other person has to guess which is the lie. You’ll hear some outrageous things playing this game. 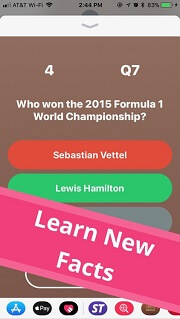 It’s right there in the name: this game is all about simple trivia. If you have a bunch of seemingly useless knowledge knocking around in your noggin, this is the perfect iMessage game for you.

There are quite a few topics to delve into and put your knowledge to the test. To make things fair and discourage cheating, you have 10 seconds to answer each question in Simple Trivia. You can even add your questions and answers for more diverse gameplay. 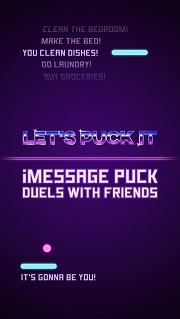 Air hockey is arguably one of the most fun games to play in an arcade setting. It’s fast, fun, and extremely competitive. While you won’t get a physical workout, you will need a lot of strategy and perfect timing to avoid your opponent scoring on you.

There’s a fascinating aspect to Let’s Puck It! that sets it apart from other iMessage games.

You can settle beef and other disputes through it. You can play an air hockey game to determine who owes someone money, settle once and for all who do the chores, and more. This little creative aspect adds some exciting flavor to a gaming classic. 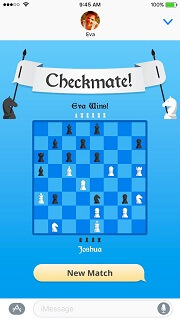 With no timer, and the ability to play multiple games simultaneously, the diversity offered by this game is unparalleled. It tracks your move history, so you never get lost or mixed up.

The Best of the Best

Here are the best games based on their genre.

Game Pigeon swoops in once again to take the title of the most popular iOS iMessage game. It’s a vast selection of different games (well over 20 by now), along with its recent resurgence in the iMessage portion of the app store, which has made it more popular than ever.

It has been praised for its emphasis on social interaction and multiplayer. During the COVID-19 pandemic, Game Pigeon has been one of the iOS users’ go-to iMessage games. It allows people to socially distance while playing games with one another.

Some users say that Game Pigeon alone is the reason some people use iMessage in the first place. We really can’t recommend the Game Pigeon experience enough.

We all know Words with Friends is the undisputed champ when it comes to Scrabble-like games on the Apple app store. However, there’s another notable word game lurking in the messages section: Wordie.

While it isn’t like Words with Friends, it’s an addictive mashup of trivia and Pictionary, featuring well over 600 levels of word-based gameplay.

The Best Basketball Game for iMessage

This fantastic, creative-looking basketball game is a hit with everyone. Made with a stunning pixel-art style, Cobi Hoops has a ton of variety. You can choose from several unique characters and shoot hoops with friends.

While there may not be a lot of strategy outside just aiming your shot, it’s still a ton of fun. 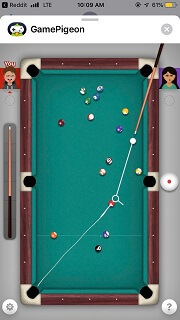 8 ball is the classic form of pool that’s been around for years. Unsurprisingly, it has made its way to iOS 10. This is a great sports game, (yes, pool is a sport), to play with a few friends.

How to Get 8 Ball on iMessage

Pop over to the app store, and search for 8 ball. Once you have it downloaded, check it out solo or send it to a friend.

How to Play 8 Ball on iMessage

Once you have it downloaded, enter the game. You will use your fingers to line up your pool shots perfectly. Hopefully, you can best your opponent with a mixture of skills, patience, and determination. 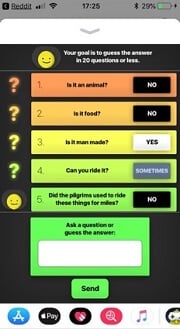 20 Questions, the timeless classic, makes its way to the iPhone, specifically in iMessage for iOS.

How to Play 20 Questions on iMessage

Use our steps above by going to the app store within the text message itself.

Find 20 Questions and download it. Then, access the game within the text field once more, and you can prompt your buddy to play it with you.

So, Should You Play Games on iMessage?

Yes, definitely. Apple jam-packed their iPhones and iPads with a ton of great technological goodies. Some of them, like iMessage games, have been staring you in the face the entire time. While it may not be like playing a game console, you can still find a ton of fun in the most straightforward games and fun activities.

Whether it’s bowling, hoops, or even simple trivia, iMessage games are fantastic little pieces fun to play with friends or solo. Give it a shot.