You are here: Home / Gaming / The Issue of Diversity in Gaming & Changes the Game Industry Is Making To Address It 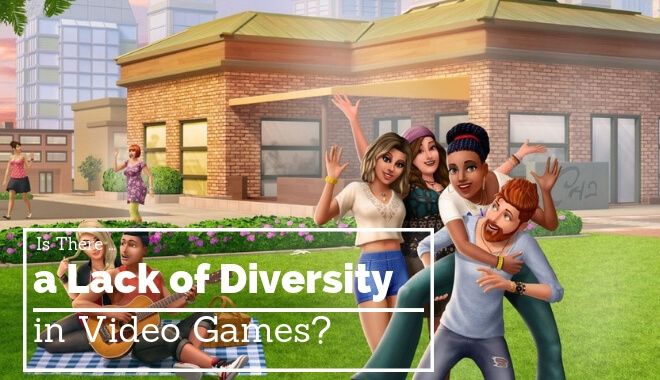 The better title might be a lack of diversity in video games.

Historically, the video game industry has been dominated by white men. There are a number of reasons for this and every once in a while we see pieces of it in internet arguments.

Some claim the culture isn’t welcoming because it’s sexist and racist. Others say of course it’s welcoming, it’s just other genders and races aren’t as interested in it. Then there’s the counter-argument that minorities aren’t interested because they don’t see it as an option, and they aren’t encouraged to pursue it.

And then you have the counterargument to that which says they aren’t encouraged to pursue it because they aren’t interested in pursuing it.

Chicken, meet Egg. Egg, meet chicken. Which one of you came first?

We think we’ll have our answer as more people of color get into games and spur younger generations to get involved. In fact, programs like this already exist.

Despite groups like Gamergate who initiate aggressive internet-based attacks on women in the industry, more genders and people of color are getting involved with games in one form or another.

But there’s still a long way to go.

The fact is, the video game industry is still not diverse.

But the majority of the industry is ready for that to change.

This article is going to first take a look at some numbers to show what’s going on. Then we’ll take a look at some baby steps that are walking the video game industry, slowly, (and hopefully surely) in the direction of a more complete, inclusive, and diverse version of itself.

The following numbers come from the 2017 Developer Satisfaction Survey conducted by the International Game Developers Association, also known as IGDA.

First up: Some age numbers. 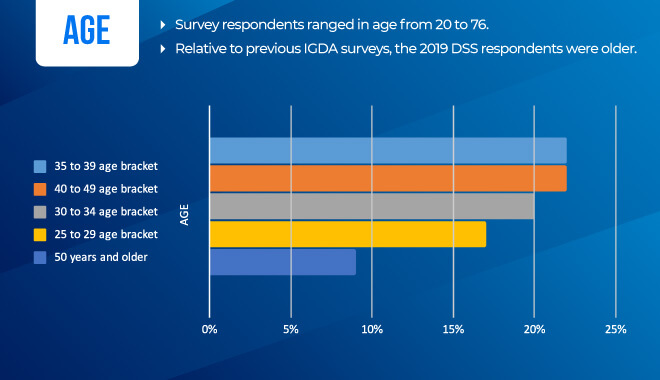 The average age of the general labor force in the United States is 42, which is clearly not the case in the video game industry.

The typical age of respondents in this sample, according to the IGDA, was 35 years old. Seven years younger than the US average.

If we had to speculate, we’d say this is more a product of the recent popularity explosion in video games. This leads to more members of the younger generation getting into games, driving the average age down.

It’s also easier than ever to start your own studio or do freelance work, which is both appealing ideas to a lot of Millennials, and perhaps less traditional or common among previous generations.

Then there’s also the burnout. The game industry, especially the AAA game industry, can often push industry veterans onto new career paths. It’s no secret that the industry loses a lot of its appeal after one too many “crunch times” (which is probably just one crunch time).

Keep in mind that these are our best guesses based on the research provided and the numbers in the industry. Although the average ages are lower than the general labor industries, this seems less a product of ageism and more a product of the industry’s boom and sometimes insane overtime practices. 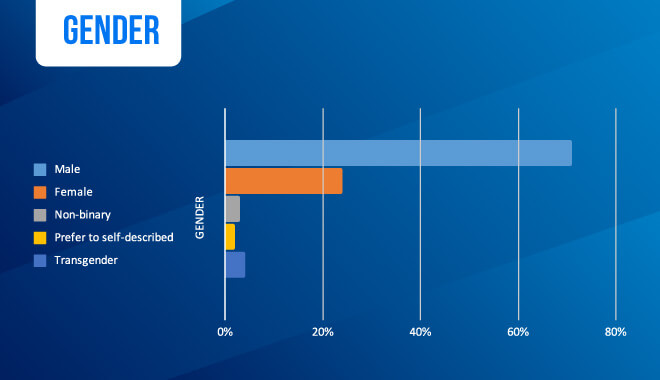 That pretty much lays it to rest. The 2016 census for the US (which only records biological sex) reported 51% women, 49% men. Not exactly reflective of the video game industry. There are 350% more men in the industry than women. 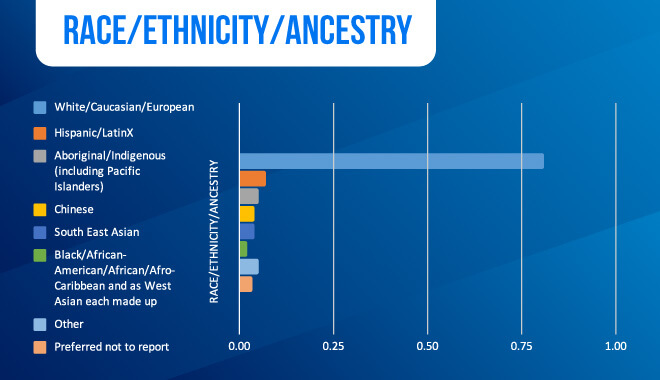 For this part of the IGDA survey, respondents could select up to 3 options. If you see two conflicting figures that seem to say the same thing, look for the keyword “only.” If “only” isn’t present, that figure represents the number of respondents who picked that response and at least one other response.

Meanwhile, in a PEW study looking at who plays games and identifies as a gamer, “some 19% of Hispanics self-identify as a gamer, compared with 11% of blacks and 7% of whites.” Do game developers not consider themselves gamers?

Obviously, all self-identifying gamers do not become game developers. There are other variables lurking here. Numbers paint a picture that can seem bulletproof, but you can’t forget rule number one of statistics, and all the implications it holds: Correlation does not imply causation. 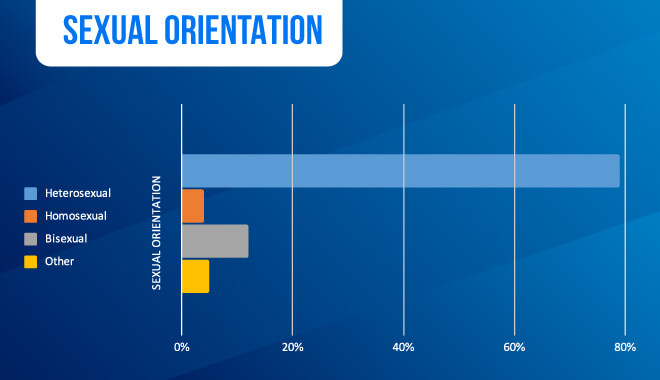 These numbers are actually higher than the reported US statistics, but the language is interesting. It says that an estimated 3.5% of adults identify as gay, lesbian, or bisexual. If this estimated number is accurate, then the video game industry is more diverse in sexual orientation than the US.

And, regarding diversity progress, Rolling Stone put it well, saying that “81 percent of developers feel that workplace diversity is either “very important” or “somewhat important”…Though developers feel a need for increased diversity in the industry, the IDGA reports only 42 percent of people polled feel its taken steps to create a more diverse workplace”. That figure is down from 47% in the IDGA 2016 survey.

The importance of diversity is being acknowledged, but less than half of respondents see any of that translating to action within the industry.

Why Isn’t the Industry Noticeably Improving?

It’s hard to say why that is.

Some people say it’s AAA games that are dominated by white men. These same people are looking to Indie developers to save the day.

Other critics say the lingering sense of game development not being a “proper job” is hurting diversity.

It’s hard to say for sure.

What About In-Game Diversity?

In-game diversity is another problem, and research points to a seriously detrimental effect for young people of color playing video games.

The University of Saskatchewan’s Cale Passmore, a Human-Computer researcher at the school, conducted a study on the effects of a lack of in-game diversity. According to the Rolling Stone interview with Passmore, he says “The same long-term effects of depression, detachment, disengagement, low self-worth are present as outcomes, as you would see in everyday, daily racism”.

As gamers, we want to play games that have characters that resonate with us, that we can identify with.

The main protagonists in video games are often white and they’re often male. Likely a result of the white male-dominated game dev workforce. The flip side of this is that any people of color characters are at risk of showing up as stereotypes in games.

A way to fix that? Hiring people from the races, cultures, lifestyles you’re trying to recreate in games.

The Push For More Diversity

Instead of simply (and vaguely) demanding change, people and organizations are out there facilitating it.

Take, for example, Girls Who Code.

Girls Who Code is a group “founded with a single mission: to close the gender gap in technology”.

They’ve already reached nearly 90,000 girls from every state in the U.S. That’s some serious progress.

Reshma, the founder, writes “We’ve reached a moment unmatched in our history, a moment as full of anger and anguish as it is promise and potential. Women and girls across the country are coming together to correct centuries-long power imbalances across lines of gender, race, sexuality, and more.”

Girls Make Games hosts “a series of international summer camps, workshops and game jams designed to inspire the next generation of designers, creators, and engineers.”

They have a great video you can watch on their website, here. And they have a number of partners: Xbox, Intel, Playstation, Discord, and more.

Even PlayStation is trying to help do its part to celebrate and support everyone, regardless of sexual orientation. In 2017, they sponsored London Pride. They even included the Twitter hashtag #ForALLthePlayers.

There were plenty of negative responses to the announcement (there always are). There were likely accusations of “cash grab” or “fake support” and, yes, with big corporations you always have to wonder if they’re truly doing anything altruistically.

But in this case, PlayStation Europe has an LGBT group within the company. It was their idea, they spearheaded it, and, as people who openly identify as LGBT, they did it for the right reasons.

There’s still a ways to go.

But game developers will catch on. This is a big bus that needs turning–it won’t be fixed overnight.

Companies are starting to be more inclusive in their games. Consider Uncharted: The Lost Legacy. The hugely successful franchise features two strong female leads in their latest installment. 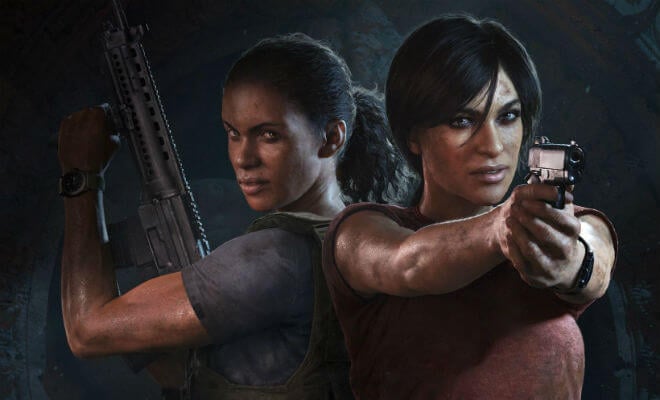 If big franchises like Assassin’s Creed, Star Wars, and Uncharted are willing to feature people of color, women, any protagonist that isn’t a white male, then surely the industry is listening and moving in the right direction.