You are here: Home / Engines / Everything You Need To Know About Voxel Game Engine: Prices and Packages and Licenses 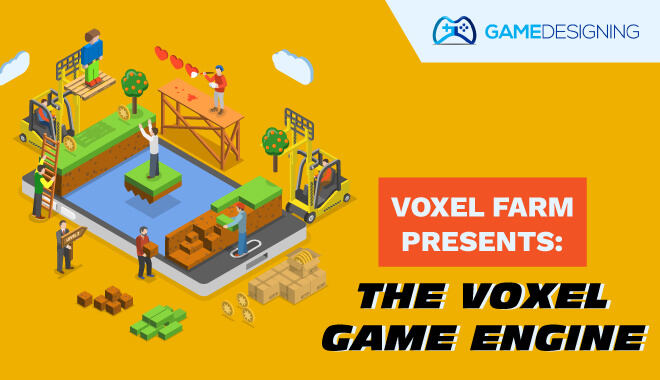 “I’m using Voxel Farm in my project… It’s not free, but definitely worth the money.” – Reddit user Ninlilizi

As gamers and followers of the newest tech, we are always looking for new things to advance gaming. Whether that is through a game, or the engine being developed to bring us those games to change the face of gaming.

What will be the next Fortnite? Or Minecraft? These are all questions on everyone’s minds not only in the industry but in the minds of gamers eager to experience the newest technology. With new, emerging engines, like Voxel Farm, gamers and creators move ever closer to these answers they seek. Smaller engines, like Godot, provide a good starting base for a developer breaking into the industry, but the engine Voxel Farm is creating new ways to view games.

“Voxel Farm is a next generation procedural voxel engine. Create rich, massive worlds for games, movies, TV shows and business applications. Allow your users to build and destroy at will in a truly sandbox environment.”

Something that struck me regarding Voxel was its compatibility with two powerhouses of game development: the two iconic engines—Unreal and Unity. Along with this compatibility is the fact that Voxel Farm has some of the biggest studios as clients—EA and Take-Two, for example. This impressive client list, to me, is all I need to know to become interested in the engine.

Voxel Farm, based out of Brossard, Quebec, Canada, the company is dedicated to allowing developers to enhance the worlds in which characters interact. It was created by Miguel Cepero, Voxel Farm

Echoing my earlier words on Minecraft, coincidentally, Voxel Farm used its tools to create a breathtaking version of Minecraft. Gone are the rudimentary yet effective pixels of our favorite world-building game. Here instead is a photorealistic depiction of the random procedure worlds we all know by heart. In the 38-minute video, I watched the player carve rock out of a craggy cliff face and build his house in an insanely detailed environment that reminds me of a lot of the Steam game Rust.

Not only that, but the far-off environment evoked a feel of the Lord of the Rings franchise; I could just imagine seeing the might city of Minas Tirith in the distance from The Return of the King. Personally, the detail and depth make me wish for an actual release of this beautiful version of Minecraft. It brings a realism that perhaps some gamers desire—I know I sure do.

Prices and Packages and Licenses 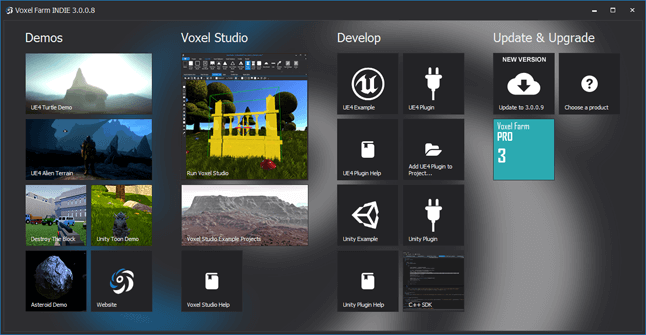 This is a serious engine to overhaul visuals and models, so it shouldn’t be much of a surprise that it may cost you. Since this engine is marketed more toward the heavy hitters of the industry—EA, for example—Voxel Farm can charge what they want. Here are some of the packages that you can purchase and download:

I would probably recommend this to the developer who is trying to branch out their gaming engine potential but doesn’t want to break the bank. I think this is a safe option, as it introduces you to the Voxel Farm engine and allows you to experience the basics of its interface and capabilities.

The most expensive, (available for purchase from the website, that is), but perhaps most useful to bigger developers, this package includes the following: UE4 and Unity Support, Voxel Studio, Partial Source Code SDK, Multiplatform

This package is authentic. It allows the user to do almost anything that they can imagine within the engine.

Unfortunately, peasants like me cannot access the price range for the ultimate package from Voxel Farm. I assume that this is for the cream of the crop of game development teams.

We all know the trial version of things. This allows a user to play around with the engine for 30 days, and the user must decide whether or not to use the engine after it expires. My money is on for license renewal.

Let’s break these licenses down further.

1 Creator: This license allows the user to build any terrain and play around with structures and make textures. The creator’s dream.
2. Indie: allows access to the engine’s code. Gives the possibility to upload your project to the Unreal and Unity engines
3. Pro: More access to the code and further creative potential. This allows you to start creating a legitimate game that you can export to the engines.

If you are having difficulty choosing the license that would work best for you or your project, they even provide a selection wizard where you check off your essential needs and they will match you up with the license that fits you. 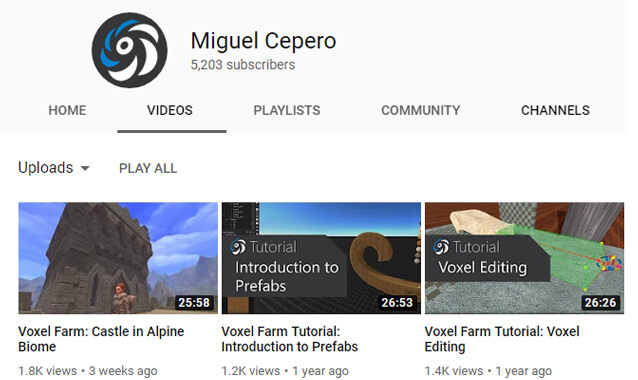 Why not bypass a lot of trouble for yourself and head over to the creator of the engine, Mr. Cepero’s YouTube channel? In his videos, Miguel shows the viewers tutorials on how to properly use Voxel Farm. His introduction video outlines the basic info of the engine, all while playing around with the impressive visuals.

He has a handful of intro videos for different aspects, as well as his projects that are in development. It’s very interesting to see the master at work.

Yes, another easily accessible tutorial from the people who helped develop it. This may be the best tutorial of Voxel Farm available. I warn you though: clicking into the tutorial on Voxel Farm will blow you away. Pages upon pages of whatever you could ever need help with are right there on the site. Need help with Voxel Farm on Unreal 3?

There is an entire page, (plus subsections), dedicated to that. Same with the use of Unity and other impressive lists like Procedural generation and Voxel Editor. This would be my first stop, as it’s comprehensive and exhaustive. Visit Voxel Farm Doc.

I mentioned the BlogSpot before, and here it is again. You have 3 greats sources for the Voxel Farm engine, all of them by people who are extremely familiar with them. This blog is suited more for the theory that will be used when operating Voxel Farm.

It introduces us to what exactly a ‘voxel’ is, (for those wondering, Miguel Cepero says: “To help understand why voxels matter today, we need a different analogy. If I had enough time, I would say voxels are like triangles.”), and different geometric practices that the developers use in the engine.

They have sidebar links with tags to help a user easily find whatever they are looking for specifically. Visit the Procworld website here.

I found this great little channel for helping with Voxel Farm. Hurtful Toad walks us through the steps to take when dealing with Unity. It includes an hour-long video where he experiments with foliage, and even includes a cool little demo on the engine itself on his channel.

This website is insanely detailed. While using specific examples of their project, the posters at cybeoreal display what Voxel Farm can do with wild specificity. If you scroll through the posts, I can guarantee that you can find whatever it is that you’re specifically looking for with the engine. Check the website here.

With these guidelines, whether you are using the trial license or the king of licenses, the Triple-A 3, you should be able to better work on your project using Voxel Farm.

The mainstreaming of game engines for more casual use has led to these dreams of more beautiful and detailed environments. Like the Minecraft video in Voxel Farm, I believe that many of our favorite games, (and future titles), have the potential to look stunning and breathe new and improved life into them.

If you were to use Voxel Farm, you would have a leg up in comparison with other engines. With the ease of exporting to Unreal 3 or Unity and creator Miguel Cepero leading the way, Voxel Farm has a bright future.