You are here: Home / Video Game Design Education / DAVE: The School That Helps You Turn Your Passion Into Reality & Get You Career Ready 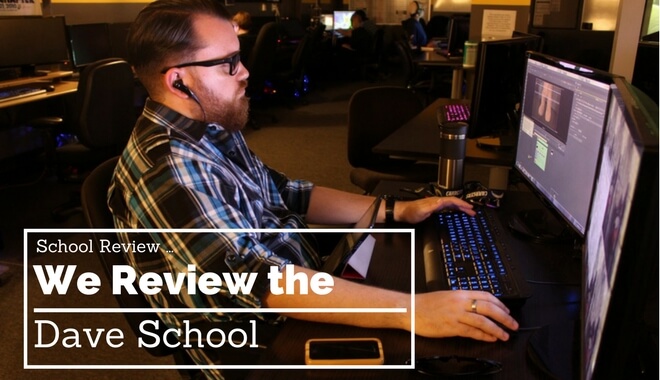 The school started with its Visual Effects Program, developing a game production program more recently. Then, in 2016, the DAVE school added two online bachelor programs. These online courses are in Motion Graphics and Production Programming.

The 2019 numbers posted for the DAVE school show a 73.91% retention and employment rates.

As we mentioned, the DAVE school offers college-level programs in Game Production, Graphics, Visual Effects, and Motion Graphics with an upcoming program in Virtual Production beginning in July 2021.

NUC University (NUC), which includes The Dave Schools is accredited by the Middle States Commission on Higher Education.

Let’s take a look at their programs so you know what you’re getting yourself into with the DAVE school.

The Game Production program at the DAVE school is a campus-based, 12-month diploma program. It consists of four different twelve-week course blocks. You’ll “work together with fellow students and instructors to create a game from scratch.”

The program is broken down as follows: 9 months fully online with the last 3 months being a studio residency at our campus located on the backlot of Universal Studios Florida.

Now, a big selling point for this program is that everything happens in “a production environment that mirrors major game studios.” You’re learning in a way that reflects how studios would operate in the real world.

By the end of the program, according to the DAVE school website, you’ll have a “demo reel sure to impress any AAA or Indie game studios looking for artists.”

Over the course of the program, you’ll take these courses:

Each course “block” stacks on the knowledge from the previous block. You’ll get a thorough understanding of 3D modeling and sculpting techniques before moving on to rigging, animation, and motion capture.

Then you’ll move to actual game creation, with a look at the whole process. Finally, you’ll pick a specialty and “elevate those skills to the level required by top employers.”

For Portfolio Production, you’ll be paired with “an experienced production manager” who “will assign you tasks that contribute to the eventual completion of the project and will supervise your work.” By meeting the standards of your production manager, “you will be producing industry quality work (that will be presented on your demo reel) every single day.”

This attention is helpful in that you know you’ll be making high-caliber work, and any mistakes can be quickly corrected. On the other hand, if your vision doesn’t line up with your production manager’s, you could have a miserable go of it. Important learning opportunities await in both scenarios!

The faculty and staff at the DAVE School seem pretty solid.

The instructors all have industry credits, which is a great sign. If the DAVE school’s big selling point is the “industry-mimicking experience,” then instruction and guidance from industry veterans are a must.

For now, let’s look at other programs at the DAVE school so you know what your options are.

In it, you will “grow your VFX skillset for a variety of CG industry jobs.” This program “gives students a broad range of skills which allows them to pursue jobs in the computer graphics industry.” This includes everything from game art, to military simulation, to feature film, to architectural visualization.

The course will also teach you the following software:

The Courses in the Program

As with Game Production, you’ll start off with the Digital Modeling and Sculpting course, and the Fundamentals of Computer animation course.

From there, you’ll go on to study Movie Magic—the art of visual effects, and Stereoscopic 3D Production.

The courses in the program are:

This program, like many of the DAVE school programs, is a highly collaborative one.

It looks like that…because that’s exactly what it is.

The Motion Graphics Bachelor’s Degree is its own program (unlike the visual effects production BA program).

It’s a 36-month program that can be completed completely online.

The Motion Graphics Program teaches you how to “utilize video, animation, and graphic design to convey information to a wide range of audiences.” You’ll be studying concepts like:

It could be because this program is so new, but the total cost is only $35,000. There are no additional fees added for the electives and general education classes.

The lower price tag and the flexibility from the online nature of the program might make this option a bit more appealing for some of you.

It’s too young for retention and placement percentages, and there isn’t a lot of feedback available from students of the program (it’s unclear how many students there have been since the program’s inception).

The Production Programming Degree Program is the other recent addition to the DAVE School’s offerings.

For this program, you’re choosing between seven different concentration tracks, where you’ll learn “how to write code for games, movies, and other productions.”

And more, depending on your track.

You can choose from the following tracks:

A Quick Breakdown of the Tracks

Alumni from the DAVE school have worked on projects like Avengers: Age of Ultron, Game of Thrones, Uncharted 4: a Thief’s End, Rogue One: A Star Wars Story, and more.

Some alumni have certainly had successes.

With an average placement rate of 68% and a graduating class size of around 150, that means about 97 students are finding jobs after graduating (This could be a reflection of the industry and not the school—the figure could also be much worse).

Is the DAVE School Worth it?

Ultimately, the choice is yours. People have found success here. But recently, 45% of students have not found the success they’re looking for.

It’s further proof that the right school doesn’t automatically mean success. It’s what you put into it.

If you like the studio simulation environment, the programs, and the faculty, it’s worth giving the DAVE school a call to find out more.

Deciding what to spend and how to proceed is no easy task. Keep taking the time to do your research. Read everything you can about the programs you’re interested in.

Weigh your options. Call and ask questions. Reach out to alumni. Look up what they’re doing now. See if you like projects that the faculty have worked on during their time in the industry. Look for projects that current students are working on.

The faculty does boast award-winners, and recent alumni have worked on big-name titles. But it’s all going to come down to the time you put in, and the skills and relationships you develop.