You are here: Home / Learn / Video Game Storytelling: How to Write Engaging Stories & Captivate Your Audience 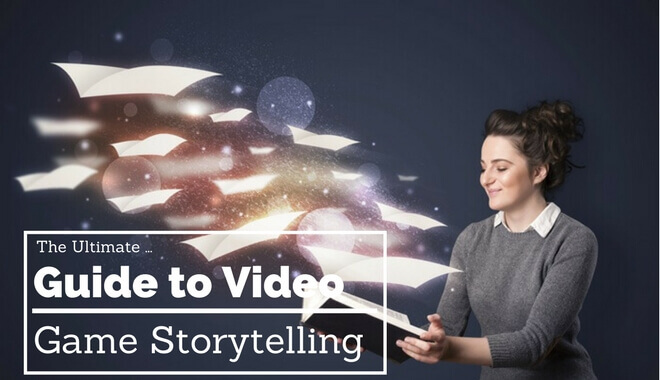 Coming up with a story is a deceptively complex challenge. You’re developing a game and your game needs a story. Ok, you’ll just go ahead and whip up a story then! Sounds easy, right?

If only the task was that simple…

Creating a story people will enjoy is no small feat, but we’ve put together this little three-section guide to make it easier for you. You won’t come away from this guide with a fleshed-out story, but you’ll have plenty of solid advice to keep in mind while you do your writing.

Characters are extremely important. You can have one character or you can have twenty characters–the number doesn’t matter, but you shouldn’t make the decision arbitrarily. Characters need to advance the plot in some way. They need to bring something to the table.

You’ll likely have characters sketched out for your game that you think are awesome on paper, but for some reason aren’t clicking in your game. If you have a character you really want to include, but he or she isn’t quite working out with your story, try giving the character a peculiar trait.

Make them allergic to bees. Make them always show up late. Make them right-hand-dominant, but have them always practicing with their left hand for tasks. Now put the characters in a situation with bees nests, or with a deadline, or that requires small-motor skills.

These particular scenarios might not work for your characters, or fit in your current game, but practicing this exercise could lead to story breakthroughs for you in ways you didn’t see coming.

Nigel West Dickens is a perfect example. He’s the snake oil salesman in Red Dead Redemption. John Marston (the main character) continually has to rely on this man, but it’s ingrained in Nigel’s very bones to be a swindler and a con artist. John Marston’s distrust, and by extension your own distrust, of Nigel, exists in a “not if, but when” state.

You both know he’s bad news, but you still can’t help but like him. And you have no choice but to trust his plans. Nigel has emotional weight and he’s a great plot-pusher. He’s always driving the plot forward with his schemes.

Player agency is tremendously important. Agency refers to the player’s ability to act or control actions in a specific environment. There are two examples we want to explore to help explain this concept. The first game uses it in a frustrating way, the second game uses it well.

Case Study: Witcher 3
We want to start by saying there are a lot of things this game does incredibly well. This particular example is one of the only times the game developers got it wrong in the Witcher 3.

There are some minor spoilers ahead.

There is a point in the game where you travel to the island of Skellige and you’ll come across a man named Jorund. You meet him initially because he has the monster-hunting details for a quest, “The Phantom of Eldberg.” Upon your arrival to the tavern, prior to meeting Jorund for the first time, you’re accosted by some Skellige losers for being a traveler, a stranger in a strange land.

Jorund comes to your rescue; he’s survived a lot of battles, and he has clout in his village, so the losers leave you alone. When you return to the tavern after solving the phantom issue, you meet Jorund again for a drink. Everything is fine and dandy.

So far, everything is good about storytelling. The characters and your interactions have triggered emotions. You feel anger towards the Skellig natives, and you feel appreciation for Jorund. After your drink with Jorund, the Skellige scum came back. This time they pick a fight for real.

This is where the developers miss the mark. This particular story element is not an issue, but how the game curates this element is an issue.

During your fight with the Skellige losers, the game mandates that one of the enemies knocks you down, at which point Jorund is run through and killed. You don’t have a choice in that. It doesn’t matter how well you fight, the game always has the enemy knock you down.

Jorund’s death is miserable because he really was a standup guy. It’s even worse because the game gives you the illusion of control. Here’s why it doesn’t work: When you’re in control of Geralt, you can fight wyverns without taking a lick of damage. You can vanquish earth golems, without getting a scratch on your armor.

Yet when facing off against two punks in a tavern, you not only get hit, you fall down! When Jorund dies you feel largely responsible– and at the same time, you feel jipped. You know that if you actually had control over Geralt in that fight, you could have dispatched the punks with no problem. If you had control, Jorund would still be alive.

We reloaded our last save when this fight went down, just to make sure that it wasn’t some weird fluke. We performed the quest again and entered the fight knowing what we had to avoid.

We had to see if we could do it without Jorund dying. When that didn’t work, we looked it up online to see how we could save him. No luck. He dies every time, no matter how well you fight, because you always get knocked down.

A cut scene might have been a better way to introduce what was otherwise a good piece of the story, especially since this fight choreography only happens once, and it’s during this particular quest.

Here’s the takeaway: Give the player her agency. Let her be in control. It’s important to guide the player along with your carefully crafted narrative, but do not disrupt her ability as the player and dispel her suspension of disbelief. Don’t make her reload her save and scour the web for answers on how to keep from getting knocked down in a fight.

Case Study: Pneuma
Pneuma, if you’ve never played it, is a fairly short puzzle game. It puts you in a beautiful world with some definite Greco-Roman vibes in the architecture. From the very beginning of the game, there is a narrator. The narrator is the character you, as the player, control.

What’s interesting is that the character doesn’t know anything about anything in the beginning–he doesn’t know who he is or why he is where he is. His dialogue is basically him puzzling through his current circumstances, out loud.

He fancies himself a god, as the world seems built around him and revolves (for many of the puzzles) around him. It’s very cleverly done, and it adds an interesting, often humorous element to the puzzle game.

At the end of the game the character, our narrator, realizes that he’s being controlled by you, the player. Once he realizes that, he starts “controlling” himself. This mostly entails the camera fighting your control and moving on its own. This is a very interesting use of wresting control from the player.

In this case, unlike in the Witcher 3 example, it works. It’s a surprising climax to the story, where the character finally realizes he’s not the god he thought he was. He’s just there for us (as players) to control for our amusement. And he fights back against us within the context of the game.

Obviously, the character isn’t real, but the game does a good job of bringing him to life, and the battle for control punches that story home. It’s a very cool 4th-wall break, and great use of manipulating player agency.

The takeaway? The player agency can be manipulated, but it has to be carefully thought out. If you take control away from the player without any context or buildup, it will likely interrupt the player’s experience. Let as much of the story unfold as you can with the player feeling like he or she is in control.

Give Your Audience Credit

Avoid explaining things overly much. Trust your audience, and give them the credit they deserve. They’ve played games, they know games, they’ll be able to figure it out.

We’ll use Pneuma again, as an example of subtlety. Some of the character’s dialogue can actually serve as a clue for solving the puzzles you face. One striking example is a puzzle involving a sundial that rotates, but only when you look at it.

If you look away, it resets. In the midst of the character’s lengthy dialogue, he briefly mentions one line about “patience.” It’s that clue that helps you solve the puzzle (spoiler: You have to keep watching the sundial until it completes a full turn and voila, puzzle solved).

This works because the hints are subtle, short, and they’re buried in entertaining dialogue that doesn’t help you solve the puzzle. The hint was not: “I wonder what would happen if I watched this sundial spin.” The quote is closer to “patience is a virtue I possess.

A god has infinite patience. A small proof of my deity. If I get frustrated with waiting, what does that mean… I’m not a god? Suppress! A momentary lapse of reason, existential crisis, everybody has one, don’t worry about it. Suppress!”

When you know the solution and you can read the words, it’s pretty apparent. But when you’ve been listening to a rambling man search for the Why, Where, Who, and What of his life, it’s a lot easier to miss the hints.

Be subtle, and let your audience work a little bit to figure things out. Let them feel like they’ve earned your story and unlocked its secrets on their own.

Crafting a great story isn’t easy. But it’s been done. It will be done again. And if you work at it, you can do it too. Some of the best advice we can give in closing is: pay attention to the stories in every game you play, even those outside of the genre in which your own game exists.

Pay attention to what works in stories. Notice, if you can, when, and why, and how you find yourself deeply engaged in a story. Heed the storytelling blunders that pull you out of the experience. Write these down and learn from them.

Keep them in mind as you create your own story for your game. Let others hear what you’re thinking and let them give you critical, constructive feedback.

Writing what you know is easier and more convincing than writing outside of your own experiences. Tell the story you would want to experience as a player. Lastly, have fun with it. If you don’t enjoy what you’re creating, no one else will either!