You are here: Home / Learn / How Hard Should Your Game Be? Easy Game Benefits vs The Hardcore Experience 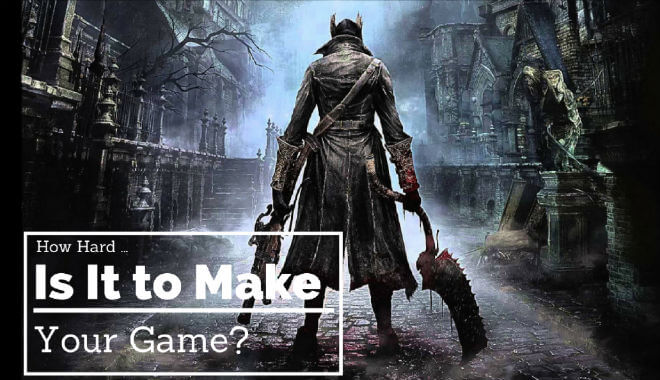 A question as old as games themselves (well, maybe the question wasn’t always asked…).

Easy, Medium, Hard, Extreme, Nightmare–many games present players with a sliding scale of difficulty. The designers give players the choice over their level of challenge.

In online multiplayer games, for example, the difficulty is largely dependent on the skills of your opponents and the other members of your team (it’s not your fault that your team lost, don’t worry. Torbjorn was *absolutely* the right offensive pick–cue rage quit!).

When it’s time to make your own game, there’s no uniform difficulty. You can’t look up some industry-wide formula. Instead of arbitrarily deciding how hard or easy to make your game, you need to think about it through the lens of what you’re trying to do.

Is the game supposed to be an insane challenge? Or do you want to create something that’s easier and ultimately more accessible?

When there’s no right answer, you can’t be wrong. And when you can’t be wrong, you can do whatever you want! We’ll still take a look at some challenges surrounding difficulty, and some pros and cons behind solutions.

You might not be developing a competitive, online AAA game. But we bet you’ve played one.

Developers have less control over the difficulty of the game once they introduce other live players into the mix. How do you balance the wide range of player skill levels? You can’t have pro-gamer tier players going against newbies.

Many team-based online games will use a leveling system and some form of skill-based matchmaking. The Call of Duty franchise has taken some heat from players for its more recent installments.

As one Reddit user so eloquently put it: “skill doesn’t mean $#!t if you’re in a laggy lobby.”

It’s a question that CoD hasn’t answered in a way that makes everyone happy. And still, their games sell millions of copies.

Ubisoft’s new hit For Honor has to make similar sacrifices. In matchmaking, they start with “strict” adherence to player skill level. The longer it takes to find a game (based on player availability and open game slots), the more extended the player skill range becomes.

In an effort to keep the wait time down, they’ll match players that aren’t the same level. If you’re an average player, going against someone who has mastered a character in For Honor can be savagely frustrating.

Is it better than waiting five minutes to find a match? Probably (we wouldn’t know, since…you know, we’re really good at For Honor).

The more you play, the more experience you get. That’s how it usually goes into games with a leveling system.

In many online games, you can hit a level cap and start over (“prestige” as it’s called in CoD–For Honor refers to it as reaching a new “reputation”).

When you’re put into a “skill”-based matchmaking game, you’re matched with other players of similar level…But a similar level doesn’t always mean a similar skill.

In short, you don’t have to be good to level up.

You can just dump massive amounts of time into the game! Most games reward extra experience for playing well, but time is ever the great equalizer. Players who aren’t as good can still prestige by spending days playing CoD.

If a player is logging in at least once every two days, she has the potential to net thousands of bonus XP for her character reputations.

While putting that extra time in should hone her skills, it doesn’t have to mean she’s a great player. It’s why you’ll see a Valkyrie at Reputation: 0 Level: 12 beats a Reputation: 4 Level: 19 Shugoki.

Some game developers, like Blizzard, have built ranking match systems into their online games. In Overwatch, for example, you play through a series of these ranking matches before you enter the competitive season for the first time. You’re given a point score based on your performance in these matches.

That system is imperfect, too. A weak link in Overwatch can undermine your best efforts. You can be at the head of your team for kills and objective time and be playing the match of your life, but if your team composition is off, you’ll likely lose.

So why did we spend all this time talking about online game difficulty?

We wanted to show how even the biggest names in gaming don’t have difficulty pinned down, but people still enjoy their games. It isn’t an exact science.

Designing Difficulty for Your Own Game

Start by thinking about the ultimate purpose of your game.

It’s a game. You probably want it to be fun. You want people to play it. You want them to enjoy the experience.

Humans are quirky and unique, so different players will enjoy different experiences.

Some players enjoy easy, accessible games. Game creators like Peter Molyneux (Fable franchise) like to cater to this market.

Not all players are looking for a challenge. There is a market for relaxing games (Minecraft, Goat Simulator, Wii Sports). These players want to play something that’s more like an interactive movie than a video game.

There are plenty of benefits to making an easy game.

Accessibility is a big factor. Sixty-five percent of households own a device for playing video games. Games are getting into more people’s hands than ever before.

An easy game opens up opportunities for people with disabilities to play, too. Younger kids can play. Older generations can play. Non-gamer friends or significant others can play.

Who are you trying to target with your game? Find out the difficulty they like to play games at. Ask the people you want to market to about the difficulty setting they used on the last game they played through. If you don’t know, then you have to guess. And if you’re guessing, you could be wrong. Let them tell you.

When you see hardcore you probably think of Dark Souls–and you’re right. Dark Souls is infamous for its extremely challenging gameplay.

That game is hardly a game for some people. It’s a backbreaking challenge. It is a task that requires serious effort, concentration, skill, and commitment.

If your girlfriend or boyfriend doesn’t play games, you wouldn’t thrust them into Dark Souls for their maiden voyage. It wouldn’t be fun for them. A player lacking the required skill would not be able to make a dent in the game. Instead of a worthy challenge, it’s just an insurmountable task.

If you really want to make a hard game more accessible, you could try simplifying the concept. .

This is the self-proclaimed hardest game in the world. It’s definitely a challenge–but it’s also very simple. Collect the yellow dots. Avoid the blue circles. Get to the green zones.

It’s easy to understand and ends up being pretty fun in an “I like the punishment” kind of way. It’s simple and accessible, but extremely challenging.

You want the player to feel challenged, not ripped-off. A game where the player randomly dies wouldn’t be fun (or randomly gets stuck in a pit–looking at you again, E.T.). Clarity and consistency go a long way in making a hard game fun.

If you’re going to make a hard game, avoid random spikes in the difficulty. A boss fight will naturally be harder than the enemies on the level leading up to it, but it shouldn’t be so hard that the player all of a sudden stands no chance.

When you beat a super challenging game, you feel pretty darn good about it. There’s a greater sense of accomplishment. That’s the gift you give your players when you design a hard game.

No you know there’s no “right” answer, no matter how big a developer you are. That means you’re free to do whatever you want.

Next time you catch yourself asking “how difficult should I make my game?” Take a minute to pivot your thinking. Ask “what difficulty brings out the best in this game” instead.

Most importantly for any game building–play it. Test it. If you don’t enjoy the challenge, tweak the difficulty. There isn’t a formula and difficulty isn’t a decision you should make in a vacuum.

Get feedback from your audience and your testers. And let your game decide the difficulty.