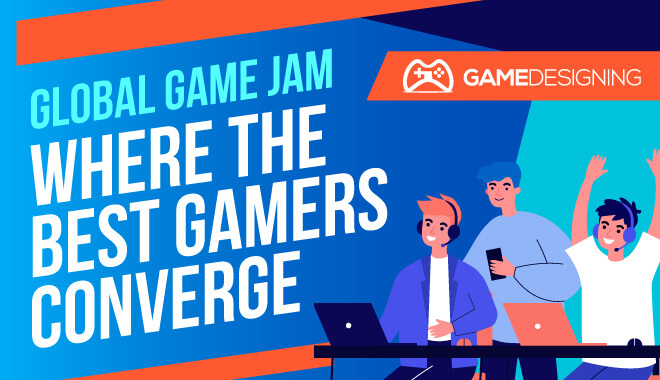 What Is the Global Game Jam?

The Global Game Jam, aside from sounding like a killer party, is an event in which people congregate together and attempt to make their games from scratch. Think of it as the nuggets, most focused brainstorming session you have ever seen.

Naturally, it comes from the mashing up of the word ‘game’ and ‘jam,’ like a musical jam session. For those who don’t know, jam sessions can last a pretty long time. So it only makes sense that this game jam sessions last for a few days and include tons of talented individuals.

Global Game Jam themes can vary. Participants find out what the theme is shortly before the Game Jam begins. For example, the Global Game Jam will state that the Game Jams theme will be ‘fire.’ Therefore, hundreds of creators will attempt to create fantastic games from scratch, dealing with the element of fire.

While the focus usually tends to be on video games, game jam sometimes focuses on other forms, like card games.

Global Game Jams are great for creators. Their motto – innovation, experimentation, collaboration, succinctly represents what they aim to accomplish.

Basically, anyone is allowed to join a Global Game Jam. You don’t need to be Hideo Kojima or a concept artist at Microsoft.

If you’re a creative-minded person who has always wanted to give a shot at creating game concepts, then joining a Global Game Jam could be a great opportunity.

Keep in mind, the Global Game Jam isn’t a competition. It emphasizes the power of creative collaboration and cooperation to make fantastic games and art.

Global Game Jams last for 48 hours straight, usually beginning at 5 in the evening on the first day and wrapping up at the same time two days later. The continuous-time limit is supposed to simulate how it is to develop a game more realistically.

This means deadlines, and a deadline 48 hours in the future is quite a crunch period.

What Can You Bring to Game Jam?

All you need to bring to a Global Game Jam is a great idea. Okay, so you’ll need a bit more, but doesn’t that sound great?

In reality, you’ll need to stock up on some protein snacks. Although Global Game Jams are required to have food to meet the requirements for operation, it doesn’t mean that stuff like pizza will help you through your deadline.

Other than that, think of what you’d typically bring with you to school or on a trip. Here are some suggestions:

How Do You Participate in Game Jam?

To become a ‘jammer’ at the annual Global Game Jam, you need to register on the official site. You need first to look up which location suits you. Thankfully, there are hundreds of global sites for you to choose from, so the chances are good you have a Global Game Jam site within proximity. For the United States alone, there are 174 locations.

Don’t worry, you don’t have to have teams formed before you join. The Global Game Jam ideally has groups forming up on the first day of attendance.

A benefit of working with strangers is that you need to do a successful game pitch. This would be great practice if you wanted to pitch your game idea to game studios. Working with talented strangers from all walks of life is a valuable experience that will only benefit you in the long run, as you’ll see in our success story list.

Global Game Jam Through the Years 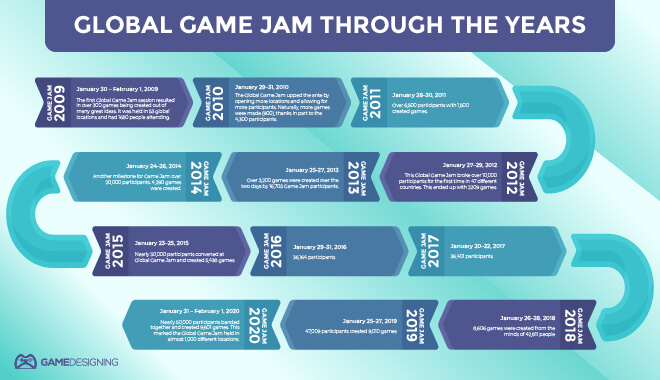 Global Game Jam has been responsible for the creation of some great little games. Here’s some you may be familiar with.

Like many successful creative projects, Goat Simulator simply started as something the creators were messing around with. You control the titular goat and cause mischief and mayhem.

Gods Will Be Watching

This exciting point and click adventure game was published by the team that brought you Hotline Miami.

In it, you control a ragtag team while you control resource management and solve puzzles. With a tremendous pixelated art style and sci-fi story, players will put their minds to the test to make sure your team survives.

Fans of the matrix and other high-tech, fast-paced action will love Super Hot. It’s an FPS tailor-made for virtual reality. In it, time only moves when you move.

Super Hot enjoyed an extremely successful Kickstarter campaign, as well as passing Steam’s Greenlight phase in only a few days.

As you can see, the Global Game Jam and being plain old fun can create some fantastic and iconic video games. With the simulation of the entire game creation process and demanding crunch time, many game developers, artists, and writers can create unique ideas and addictive games. Will you sign up for the next Global Game Jam?